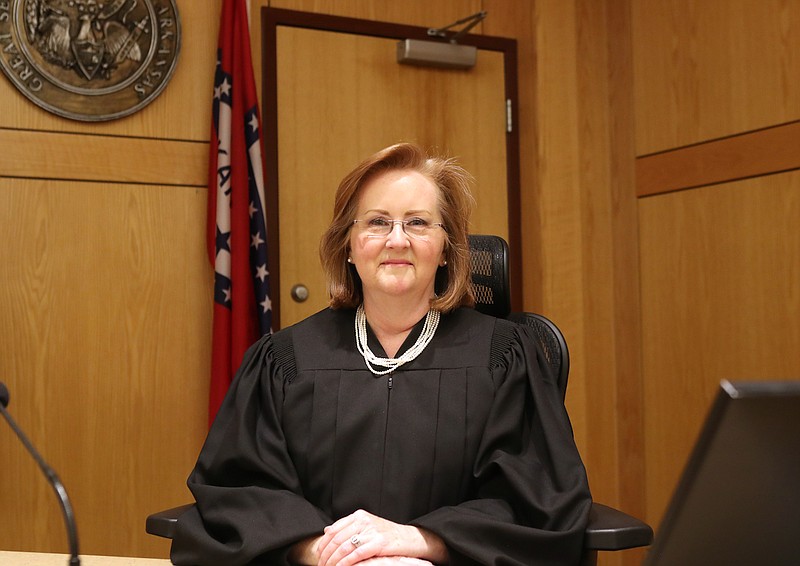 While she has only held the office for less than a year, Garland County Juvenile Court Judge Cecilia Dyer said she has already learned a lot in that span of time.

"Every day, on my drive home from work I'm going over everything I've learned and experienced that day and it's just amazing the things I've learned, the issues I've dealt with," Dyer said. "You would think as many years as I've practiced I would have heard and seen it all, but I come here and realized I haven't seen it all."

Prior to being elected in November, Dyer spent 29 years practicing family law, including 17 years in private practice and 12 years as attorney for the Department of Human Services' Division of Children and Family Services.

"It's so different wearing the lawyer hat and advocating for one side and then putting on the judge's hat," she said. "One, I'm not advocating. I'm listening very intently and very carefully to every side and every argument and trying to figure out what's in the best interest of this child. What does this child need? What can I do for this child?"

Born in Paragould, Dyer said her parents moved to Kentucky when she was 6 months old so she "spent her formative years" including grade school through high school there before graduating from Warner Southern College in Lake Wells, Fla., now Warner University, and meeting her husband, Kevin, shortly after. While his parents were from Florida, her parents, who both grew up in Hot Springs, had moved back here and "I won that argument and we decided to come here," moving to Hot Springs in 1983, where she commuted to the University of Arkansas at Little Rock School of Law.

Dyer said becoming a lawyer "wasn't necessarily always my goal," but taking a Civics class in eighth grade "kind of piqued my interest." She said she "always had a love and fascination for the law. A fascination with how a society governs itself and the rules and regulations regarding that, so I always had it in the back of my mind." She started as a business major but a business law class "just opened my eyes to the world of law and I've been intrigued and fascinated ever since," she said.

Dyer's upbringing and "my love of families and children," steered her toward a focus on family law, she said.

Her private practice centered primarily on family law, including divorces, custody, visitations, adoptions, guardianships, paternity, "that sort of thing," she said, noting "most attorneys want to run from family law. They don't want to mess with it. It's many times not pleasant. It's very sad and can be very discouraging. Most want to run away but I found myself running towards it instead of away from it and it just goes back to individual callings."

After 17 years in private practice, she said she "didn't grow tired of it," but wanted to "move into something different" and "have more of a direct involvement and more of a direct impact, especially on the children of Garland County." She had done a lot of attorney ad litem work "where you're representing the best interests of the child," but she realized as an attorney for DCFS she could have more of an impact "on the children that were being abused and neglected in our county."

Dyer worked with DCFS for 12 and a half years before taking the position as juvenile court judge in January.

Asked about her first eight months, Dyer said, "It's going well, at least from my perspective. I remember the first probably six or eight weeks I was in this position, every Friday afternoon, when I would leave, I would either tell Sarah, my trial court assistant, or say to myself, 'Well, I don't think I messed up anything too bad.'"

In her position, Dyer hears 55% of all the domestic relations cases, 25% of all probate cases, 100% of all juvenile delinquency cases and 100% of Families in Need of Service or FINS cases, while Circuit Court Judge Lynn Williams continues to hear the dependency neglect cases under the juvenile division.

Asked about some of the more serious criminal cases she's faced with, Dyer said, "We have had rape cases ... in the last three or four months, we've had probably, just guessing, five rape cases come before me. That's a scary thought. It has been, I don't know if surprising is the right word. We've also had a lot of drug cases. Unfortunately and sadly, it's happening in our community. This has been a surprise, how many minors in possession of a handgun. That and typically going along with that are companion drug charges. Very serious charges, we're talking about Y felonies."

On the FINS side, 98% of the filings are truancy issues, Dyer said, but some involve other matters.

"It's when a juvenile's behavior is out of control and the parents or school officials petition the court to step in and provide assistance to the family. Typically, it's the schools filing petitions saying the child has missed too many days of school. As you can imagine, once we get into the case, typically there's a lot deeper issues going on in the family," she said.

"Our goal is to provide services to that family and see what we can do to help that family, to rehabilitate them and get the child back in school and back on the right educational track and help the parent with any resources we have available to help them in dealing with their child."

The worst part of her job? "Probably when I second-guess a decision," Dyer said. "I'm the type, I want to think about things if I have the luxury of time. I want to think, I want to contemplate and mull it over. I think the worst part is being hard on myself, thinking 'I hope I made the right decision. I hope I made a good decision that's going to have a positive effect on this child or this family.' I start to second guess myself."

She said the other hard part is "hearing the stories of all these families, whether it's a domestic relations case or a delinquency case, there's so many hurting families out there. People are so needy. When you see, especially with the domestic relations cases where both sides come in here and they're arguing so much and you see these poor kids right in the middle. The hard part is always the suffering of the kids."

The best part? "That feeling of thinking you really did help this family. You're having a positive influence and effect on this family. That's the best part to me," she said.

Dealing with the COVID-19 pandemic in her courtroom has been "up and down," she said. "When I first came on board at the first of the year we had the mask mandate and all of that so we were wearing masks everywhere including in the courtroom and certainly having a lot more Zoom hearings. Then things got better, the mandate was lifted, the vaccine came out."

She said her policy was that "any person in my courtroom that felt more comfortable and secure and safe or whatever wearing the mask, then wear the mask." But there was a downside. "Masks actually make it difficult to hear or understand and in the juvenile world it's even worse because the kids mumble. I can tell them to speak louder and they don't. I have had to tell them to lower their mask while they're addressing the court and then put it back up," she said.

Asked if being judge was what she expected, Dyer said, "It is, but it's also much more than I expected." One thing that surprised her is "I'm not as stressed as I used to be. I think in reality it's probably a different kind of stress. In this position, I feel the weight of every decision I make. When I put on that robe, I feel the weight of what's about to happen. The seriousness of it. And it's a different kind of stress," she said.

"That's what surprised me. In some ways, less stressful than when I was an attorney. Because in this position what I say matters and what I think is going to affect somebody, whereas before I could state my opinion all day long and it didn't really matter. But here it matters so that weighs heavy on me. I feel that weight."

The other circuit court judges and the two district court judges "have been so helpful" and "sort of acted as a mentor to me during all this," she said. "Everything is so busy, it makes the days go very fast."