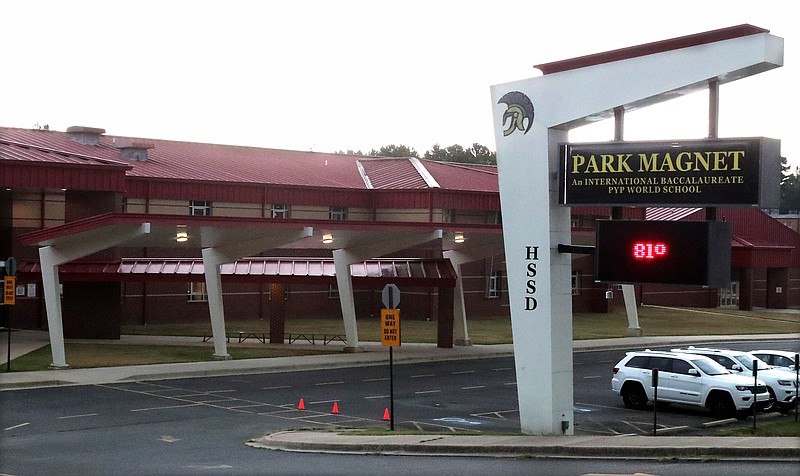 Park Magnet School, shown on Tuesday, has been named a National Blue Ribbon School. - Photo by Richard Rasmussen of The Sentinel-Record

Park Magnet School in the Hot Springs School District was named one of four National Blue Ribbon Schools in Arkansas for 2021 Tuesday by U.S. Secretary of Education Miguel Cardona, according to a news release from the U.S. Department of Education.

The recognition is based on a school's overall academic performance or progress in closing achievement gaps among student subgroups, the release said.

"It is an outstanding accomplishment by our Park Magnet, an IB World School, to be recognized for a third time as a National Blue Ribbon School," Adriane Barnes, Hot Springs School District communications and public relations coordinator, said Tuesday.

"Park Magnet is one of three elementary schools in the Hot Springs School District. Our Park Magnet staff members and school community spend countless hours of planning, training, and practice to maintain the elite status as a Blue Ribbon School within the 'Exemplary High Performing Schools' category," she said.

"This coveted award means that Park Magnet and three others in Arkansas have been chosen as among the very best elementary schools in the United States based on academic rigor, closing achievement gaps, and offering challenging and engaging content for a diverse array of students," Barnes said.

"We look forward to announcing this big news to our Park Magnet students and the entire Trojan Family (today) with classroom celebrations and festivities. We also look forward to the opportunity to thank our parents and school community, our incredible staff members and administrators, and our school board and leadership team for their unwavering support throughout this process," she said.

Cardona made the announcement during his Return to School Road Trip, while visiting an awardee school, Walter R. Sundling Jr. High School, in Palatine, Ill., the release said.

"This year's cohort of honorees demonstrates what is possible when committed educators and school leaders create vibrant, welcoming, and affirming school cultures where rich teaching and learning can flourish," Cardona said in the release.

"I commend all our Blue Ribbon honorees for working to keep students healthy and safe while meeting their academic, social, emotional, and mental health needs. In the face of unprecedented circumstances, you found creative ways to engage, care for, protect, and teach our children. Blue Ribbon Schools have so much to offer and can serve as a model for other schools and communities so that we can truly build back better."

The Department recognizes all schools in one of two performance categories, based on all student scores, subgroup student scores and graduation rates:

• Exemplary High-Performing Schools are among their state's highest performing schools as measured by state assessments or nationally normed tests.

• Exemplary Achievement Gap-Closing Schools are among their state's highest performing schools in closing achievement gaps between a school's student groups and all students.

"Up to 420 schools may be nominated each year. The Department invites National Blue Ribbon Schools nominations from the top education official in all states, the District of Columbia, Puerto Rico, the Virgin Islands, the Department of Defense Education Activity, and the Bureau of Indian Education. Private schools are nominated by the Council for American Private Education," the release said.