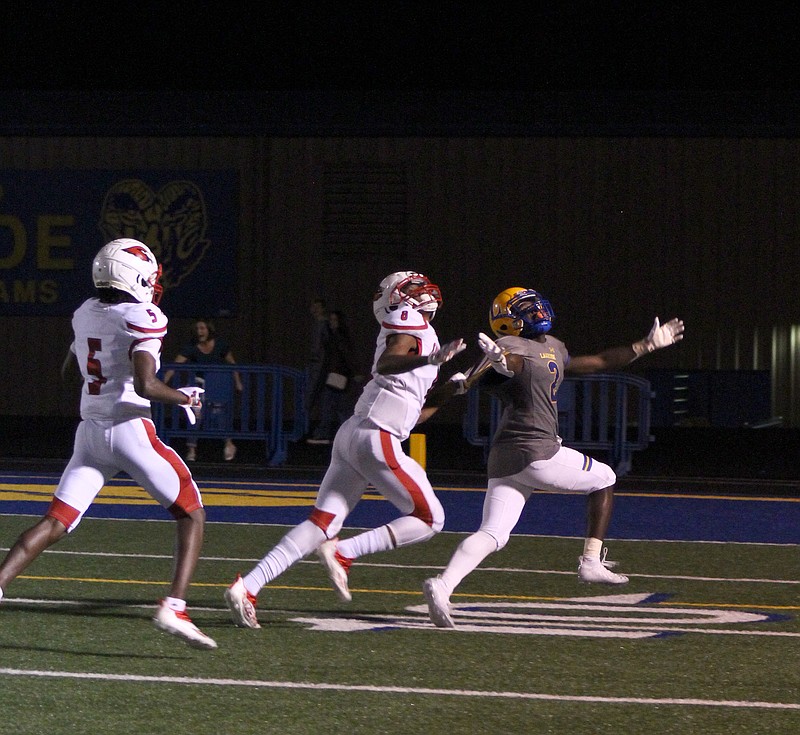 Lakeside receiver Chase Cross (2) is grabbed by Camden Fairview&#x2019;s Ja Bauree Lockhart (8). Lockhart was called for pass interference on the play. - Photo by James Leigh of The Sentinel-Record

Despite a quick start offensively, Lakeside struggled on defense as Camden Fairview held on to take a 38-33 win at Chick Austin Field Friday night.

Lakeside held the lead for just over 13 minutes of the game, three minutes less than its total possession. Following a blown drive that saw the team pushed back 11 yards after a 12-yard sack of quarterback Jordan Mills, Camden Fairview took advantage of a mediocre punt to drive 47 yards in just four plays to take a 19-14 lead into the break and never looked back.

"We just didn't call a good series of plays to help get out of the half and keep the lead," Rams head coach Jared McBride said. "That's on us. But, yeah, that was that was a big deal. It kind of bit us in the end. But, you know, our kids fought all along, and we had a chance in the end."

Cardinals quarterback Martavius Thomas found a way on the ground and in the air to pick up yards, completing 16 of 22 for 229 yards while rushing 14 times for 128 yards. Thomas threw for three of the Cardinals' touchdowns on the night.

"He's been really good with the ball this fall," said Camden Fairview head coach Jeremiah Monden. "I mean, I think he's had two turnovers, and they were just meaningless turnovers; we're just trying to take shots here and there. And that's, you know, he's a junior, and that's the biggest thing, you know, in my opinion about him. He's a, he's a humble kid. The kids rally around him. He competes hard, and he's just really good with the football."

Going into the game, McBride knew that it was going to be a battle, and he was proud of the way his team competed.

"They battle every game, and I'm proud of them," he said. "And, you know, Camden's our lead in to conference every year, and it's such a tough battle. And we win some, and we lose some of those, but you can't fault our kids and the way they played."

Monden said that his team knows that they cannot overlook the Rams due to the conference implications as well as the quality of team that they are.

"It always is (a battle), and, you know, coach McBride -- they've got a great team and then they've had a really tough schedule," he said. "I thought they beat a really good Malvern team a week ago, you know. And, you know, the week prior that didn't get, they weren't able to play Watson Chapel, and no, I mean, they've had a tough schedule and -- as we have, too -- but you know anytime you come up here to Lakeside, you know it's gonna be tough. And, you know, our kids did a great job of preparation this week."

Rams running back Braylen Russell scored all but one of the Rams' touchdowns, rushing 23 times for 115 yards and four touchdowns while reeling in a six-yard pass.

"They're so big and physical up front," McBride said. "It takes a lot of our people to try to get them blocked. And he did a great job of setting his blocks up and finishing his runs, and our guys fought hard for him up front. He had a good night, and our guys around him did well also."

Lakeside quarterback Jordan Mills threw up some big passes as well, including a 33-yarder to Chase Cross who ran the ball 60 yards for the score. Mills attempted to connect with Cross late in the first half to regain some momentum, but a pass interference call against the Cardinals led to Mills overthrowing his second attempt at a 39-yard touchdown pass.

"He's got a big arm and is settling in nicely and delivering some good passes," McBride said. "And he's, he's spreading it around. There's a lot of kids catching the ball for him."