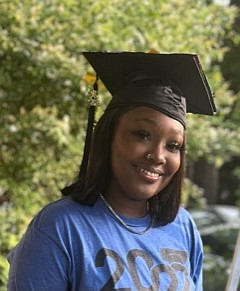 Yolonza Ford, a graduate of National Park College, has been named the recipient of a $1,500 scholarship by the Hot Springs/Hot Springs Village branch of the American Association of University Women.

Having received her associate degree from National Park College, Ford is working on her bachelor's degree in criminal justice from the University of Arkansas at Fort Smith and will graduate in May 2023.

She said she was first inspired by her grandfather, a police officer, who encouraged her to follow her interest in the justice system. This summer, she worked as an intern at the Hot Springs Police Department where her grandfather served.

Ford ultimately plans to work for the Houston Forensic Center in Houston, Texas, in which she will first be assigned to a 13-week academy program in Oakridge, Tenn.

Averaging a GPA over 3.0, and a frequent member of the dean's list, she was selected to participate in the National Society of Leadership and Success program, through which attended training broadcasts, led by experienced national leaders such as President Barack Obama and President George W. Bush, among others, a news release said.

She also engaged with other young leaders across the country and was awarded the Foundations of Leadership Certification.

"With a true passion for social justice and advocacy, Ford has already made significant contributions in community service work and maintains a fierce determination to succeed. Respectful, empathetic and hardworking, she lives by her personal belief that every finish line is the beginning of a new race," the release said.