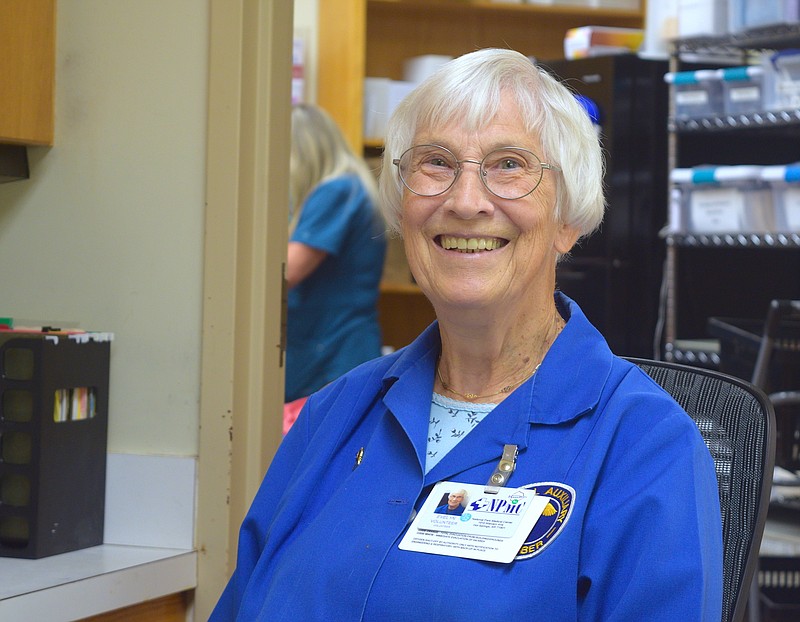 Evelyn Geyer has served as a volunteer at National Park Medical Center for more than 30 years. - Photo by Donald Cross of The Sentinel-Record

Over 30 years ago, Evelyn Geyer's husband, Bill, told her to find something to do.

Little did either of the two of them know Evelyn would find a calling that would keep her busy for over three decades at National Park Medical Center.

"As a kid, I knew about candy stripers, and I always thought that would be neat," Evelyn said. "But I didn't have the opportunity, and after my husband retired in California, we moved here. After we settled, one day, he said, 'Why don't you find something to do?' So I came to the hospital and volunteered, and he followed within a week. And he was a volunteer also until he passed away."

After his retirement, the couple were looking to move back east. Bill was originally from Ohio and Evelyn from the St. Louis area, but they decided to check out some land Bill's uncle was looking to sell in Diamondhead.

"His wife passed away before they were able (to use it), and he offered it to my husband," she said. "We wanted to move back to the Midwest from California, and he and my husband met here. My husband rejected it because it was too far from town, or further from town than he wanted to be.

Evelyn started working in the emergency waiting room, but she has worked in several areas throughout the hospital in her 31 years as a volunteer.

"The lady who had been there before me decided to come back, and she wanted her job back," she said.

Bill, who died in 2011, volunteered in the nursery, and Evelyn was moved there to pack promotional items for new mothers.

"My husband, of all places, he volunteered in the nursery," she said. "The different companies used to give products for the new mothers, for the babies, and I started packaging those for them. The then-supervisor in the lab heard about me filling these packages, and she recruited me. I don't know how she finagled, but she got me into the histology lab, and I've been there ever since."

Histology is the study of tissues using microscopes, and Evelyn's job consists of making sure everything, including the reports and slides, is properly filed.

"Basically, I file the medical reports, and I file the slides and the blocks, which the tissue is put in after surgery," she said. "Each patient is given a number, a medical number, so all these things have to be put in numerical order. And to me, every number represents a patient, so I take that very seriously."

While she does not get to work directly with the patients at the hospital anymore, Evelyn said she enjoys getting to help them.

"It gives me a lot of satisfaction when I see the gratitude on people's faces," she said. "Right now, my job isn't working with the patients as such, but when I have helped patients, they're always appreciative."

NPMC has three pathologists whose work goes through the histology lab, and each one has his or her own method of sending things to the lab.

"We ... had two pathologists -- two weeks on, two weeks off -- and they both do things differently," Evelyn said. "Well, now, within the last year, they brought in a third pathologist, who is here full time, and, of course, he does things differently, especially putting the slides in order. The one doesn't necessarily give them to me in order, and that's one of the things that isn't the most fun, especially when you're working with numbers."

While many people might get tired of doing the same thing for over 30 years, Evelyn enjoys what she does.

"I can only say that I enjoy it," she said. "As I said, each one of those medical numbers or surgical numbers represents a person. ... I feel like I'm doing something worthwhile. Like I said, I enjoy the people."

Evelyn and Bill never had children of their own, but Evelyn was a teacher before she retired. To her, those students were like her own children.

"Bill and I married when I was older, and I didn't think it was the right time," she said. "I could have, but I just didn't feel it was the right thing. I'm a former teacher, so I always tell people I had 30, 35 kids every year."

She taught students of varying ages during her teaching career.

"Over the course of my career, I've taught everything but first grade and fourth grade," she said. "One school we did by subject matter, like they do at high school, and I taught the English part. Then we'd have our homeroom or we have the PE and that sort of thing. But basically, seventh and eighth grade -- I had more years there."

Evelyn has gotten close to her co-workers, and she considers them her own family.

"They're like my second family," she said. "And the two ladies I work with now are not the same ones I started out with, but I think we've become very close. They always show their appreciation.

"The pathologists, all three of them, always express (their) thanks. And, of course, I see the other volunteers -- I had lunch with two of them. ... I have no relatives here, so they really are like my family, and I enjoy it."

Evelyn works four-hour shifts twice a week, but she always tries to make sure things are done right, even though she does not draw a paycheck for her work.

"A lot of times, I'm not finished doing what I want to get done," she said. "And so after I have my lunch, I'll go back and maybe I'll stay an extra 30 minutes or (so), and I don't count it. I just want to finish up and make sure the job is done."

Evelyn and Bill both volunteered at the hospital until his death in 2011, and his entire volunteer experience was in the nursery.

"He worked in the nursery," she said with a laugh. "And it's funny because he used to say when he would see kids behaving, he would say, 'Take those kids to the alligator farm.' And here he ends up in the nursery, but he kept their supplies. ... He enjoyed it, and he became very close to those people who work in the nursery, too."

Despite volunteering for the past 31 years at NPMC, Evelyn has no plans on stepping down.

"I know I have relatives in the St. Louis area who think I should go back home. I haven't been 'home' in 48 years. I don't know what I would do there. They tell me, 'Well, there are hospitals here, too,' and I said, 'Yeah, but that's not the same. It's not the same.' 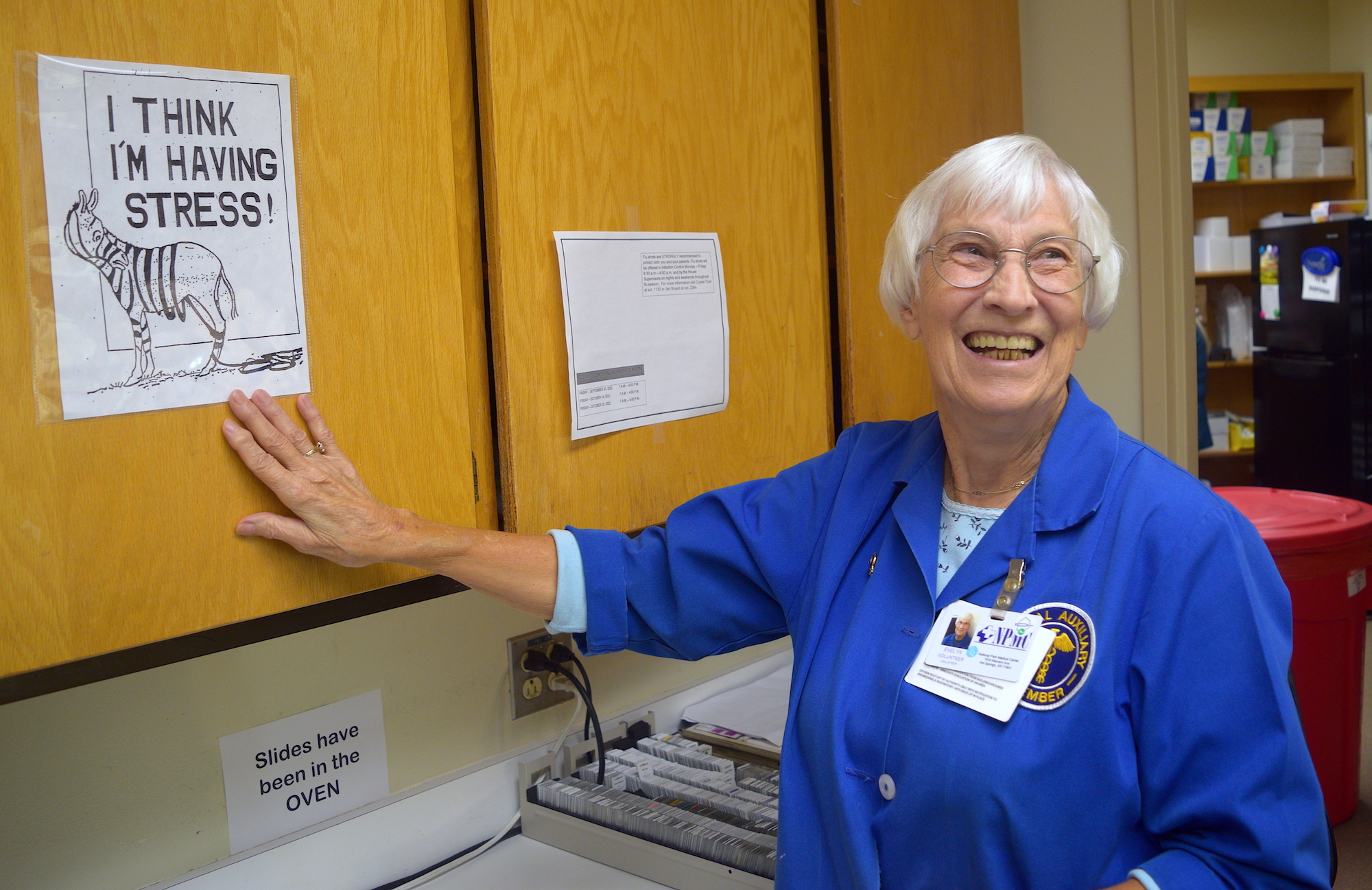 Evelyn Geyer, volunteer at National Park Medical Center, points to a humorous sign in her workspace. - Photo by Donald Cross of The Sentinel-Record 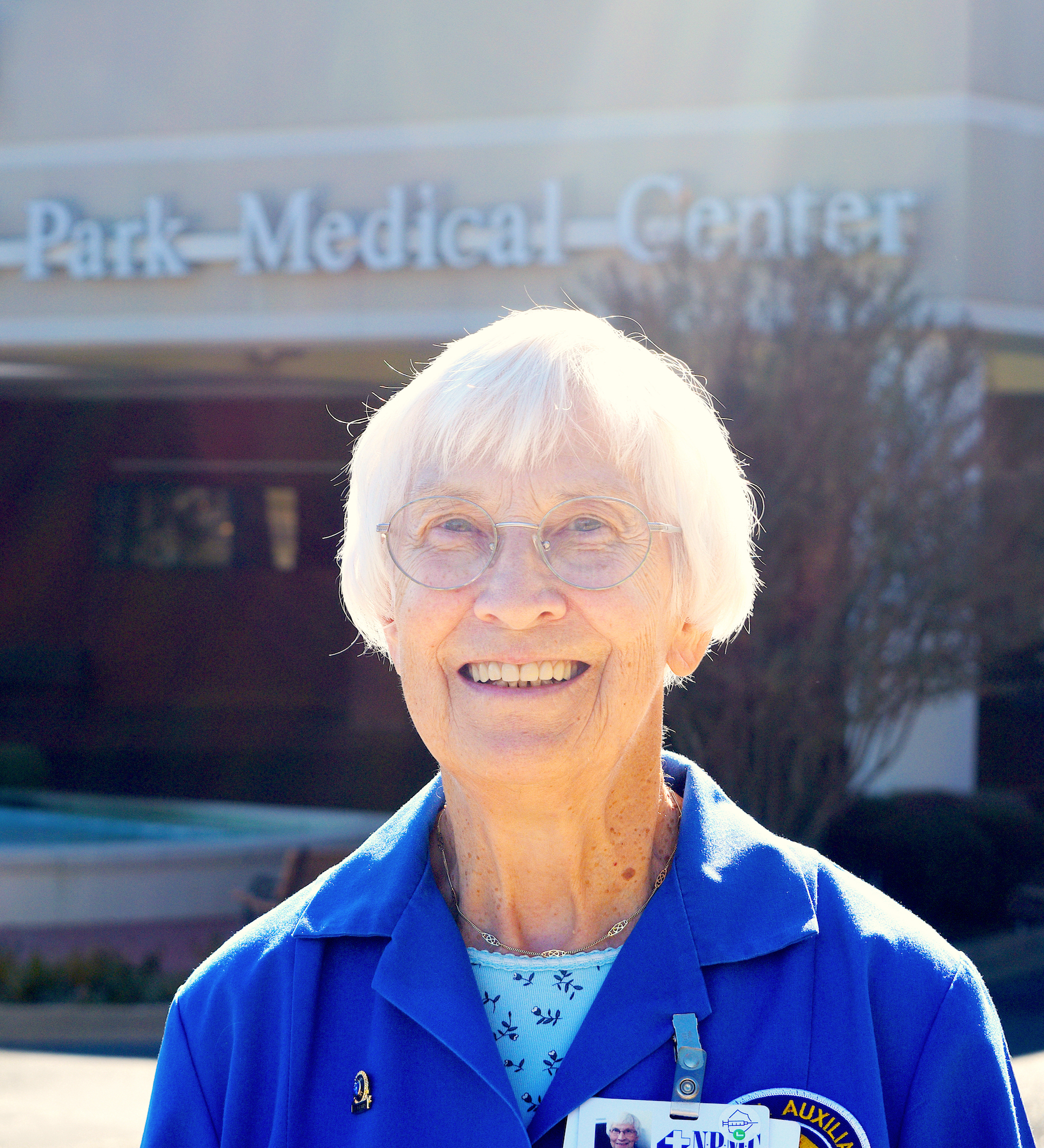 Evelyn Geyer, volunteer at National Park Medical Center, is shown outside the hospital. - Photo by Donald Cross of The Sentinel-Record 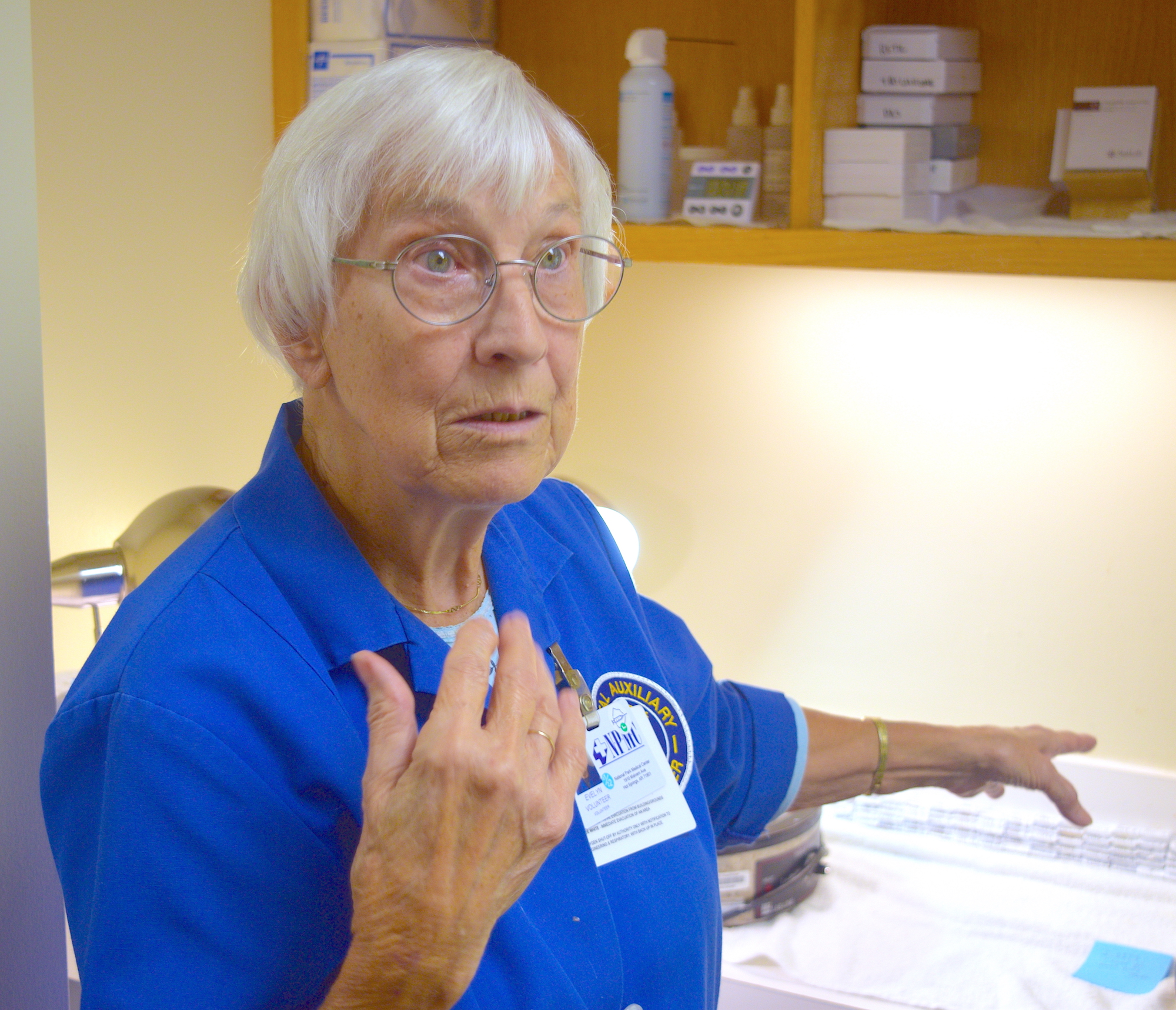 Evelyn Geyer, volunteer at National Park Medical Center, explains some of the tasks she completes in the histology lab. - Photo by Donald Cross of The Sentinel-Record 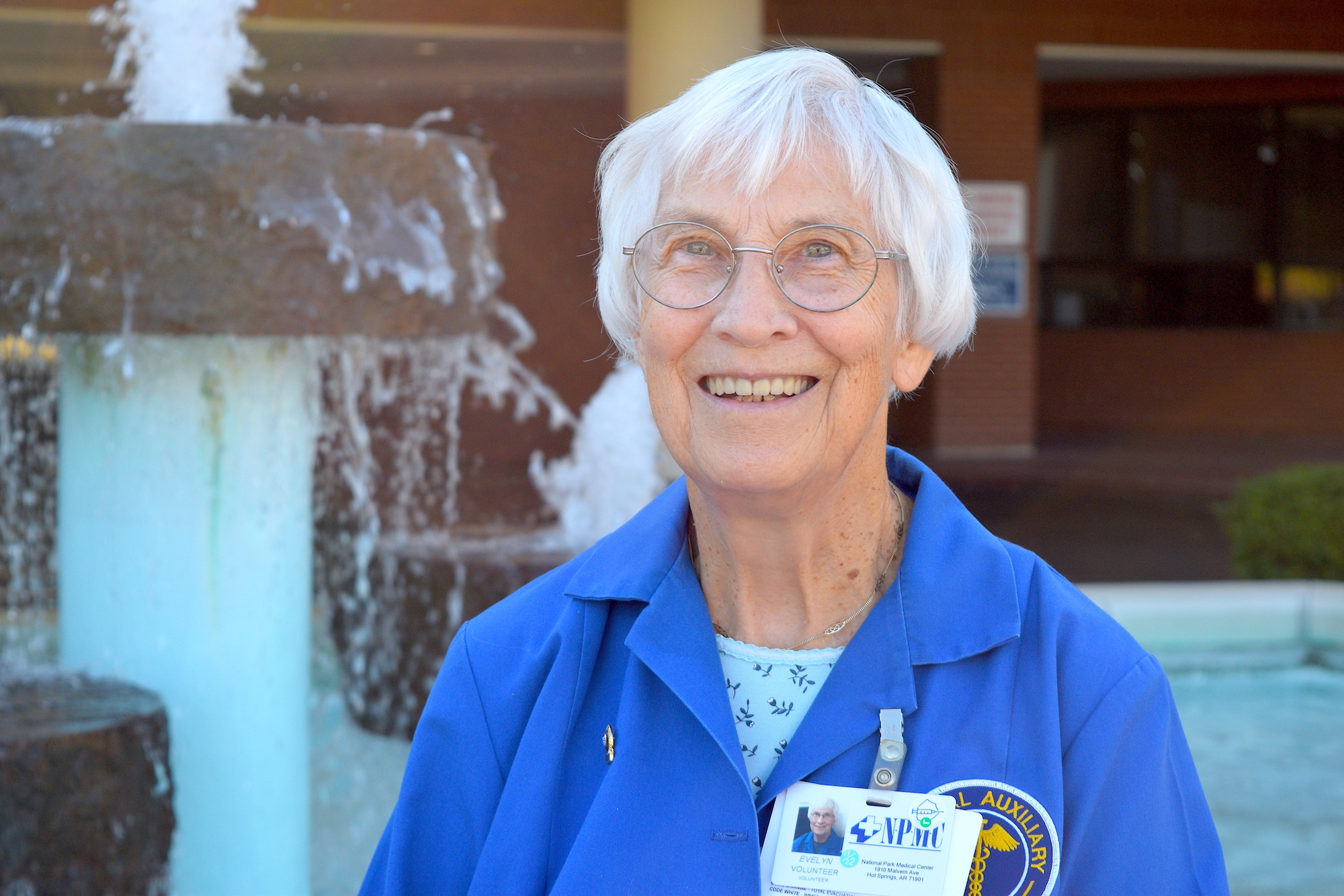 Evelyn Geyer, volunteer at National Park Medical Center, is shown by the fountain at the entrance of the hospital. - Photo by Donald Cross of The Sentinel-Record