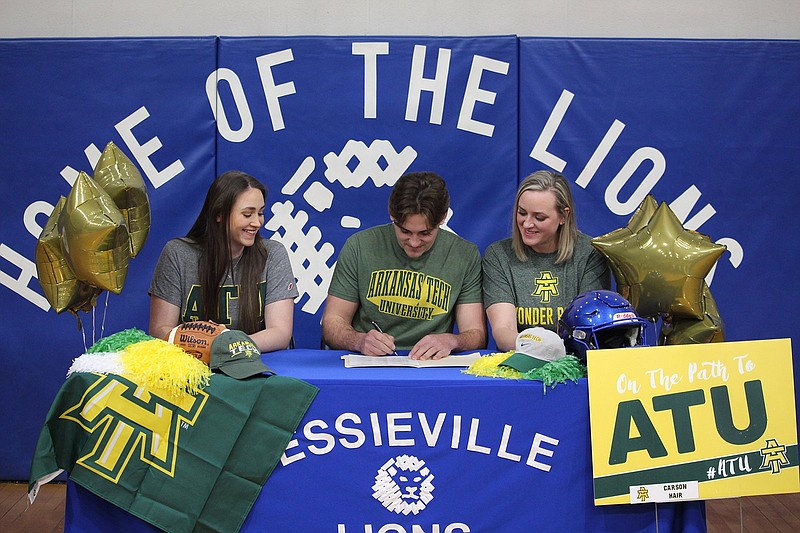 Jessieville quarterback Carson Hair signs to play at Arkanas Tech University surrounded by his sister, from left, Madison, and his mother Cassie Hair at Jessieville Sports Arena Wednesday. - Photo by Krishnan Collins of The Sentinel-Record

JESSIEVILLE -- Becoming the second Lion to sign to play at the Division II level in as many weeks, Jessieville quarterback Carson Hair inked his National Letter of Intent to play football at Arkansas Tech University at a ceremony in Jessieville Sports Arena Wednesday.

A four-year starter at Jessieville, Hair made plays with both his arm and legs on the field for the Lions. The senior ended the 2021 season with 1,261 passing yards and 12 touchdowns.

Hair also led the team in rushing with 1,325 yard on 165 carries along with 17 scores. The senior joined running back Matthew Huff, who signed to play at Ouachita Baptist University on Feb. 2, as two future Division II football players from Jessieville.

"It's hard to replace a guy that started for four years, and kind of the same thing with Matt," Jessieville head coach T.J. Burk said. "They're not replaceable. We've got to find some guys that can come in and take over those roles and grow into them kind of like those guys did when the guys before them left. It's hard to replace somebody like that."

Hair said he looks forward to playing against competition that is a lot better than him on the next level and seeing how far that competition can push him to get better. The senior chose Arkansas Tech because it felt like home.

"I went on a visit, and just the coaching staff there was really, really welcoming," Hair said. "I feel like they can help me with school and everything and get me all the help I need. It felt like home whenever I was on campus. That was the biggest reason for me."

While Hair certainly had a good arm in high school, he averaged eight yards per carry in his senior season and boasted a 71-yard carry.

"I think my legs are probably the best that I have to offer just because of my build," he said. "I mean I can run the ball very well. I think that's what I can offer the best."

In his high school career, Hair was an electric dual threat quarterback, but the senior actually signed to Arkansas Tech as a tight end.

"I signed as a tight end, so I'm probably going to be catching the ball, running it a little bit, using me in a little bit different way than I expected," he said. "But I'm ready to see what happens and go with it."

Burk said Hair is leaving behind a big legacy at Jessieville.

"I don't know what the yardage is, but I know he's got the school record for passing yards in a career and touchdowns as well," Burk said. "Anytime you've got school records, and you're leading in categories like that, you've left a big legacy. His legacy as a student, as a person and a leader on this campus goes a long way as well."

To Hair, his legacy at Jessieville comes from all the adversity he faced in his time as a Lion. In December 2020, Hair lost his father to a heart attack.

"I feel like I've shown the underclassmen how to be strong when adversity hits," Hair said. "With everything I've gone through in my personal life and still coming back and doing the things I have playing football and stuff, I just feel like I've been a strong leader. Just showing that I can push through all that. If I can, then anybody can."

Although Jessieville is just a Class 3A school, the Lions churned out two Division II football players who are going to play in the Great American Conference.

"At a school this small, if we can get one that signs, that's a big deal for us," Burk said. "To have two, it's huge for us as a program. It gives the guys that are coming up kind of a bar to shoot for. It lets them know that if you put in the work, it's possible."

Hair and Huff were an extremely threatening duo in the backfield for Jessieville, and Burk said the two stars are like brothers.

"They do everything together," he said. "It was a team first mentality for both of them. They were willing to do anything it took to win a football game. When you have guys like that leading your team good things are going to happen."

Neither Hair nor Huff had a big ego when it came to who scored the touchdowns.

"It's something special," Hair said. "There's not just a whole lot of teams that the quarterback and running back that graduated are going to play college football. I mean it's a big thing. I think it goes to show that the coaches worked hard to get Matt and I where we are. It shows that they care enough to push us to go and play at the next level, and they can build good players."

In his time at Jessieville, Hair said his football knowledge and IQ has really grown. The senior added that he feels like he knows everything he can about the game of football. He emphasized that when a player has a good football IQ and is already a good player on the field, it makes that player an above average talent.

Next season, Hair will get the opportunity to test that football understanding on the next level.