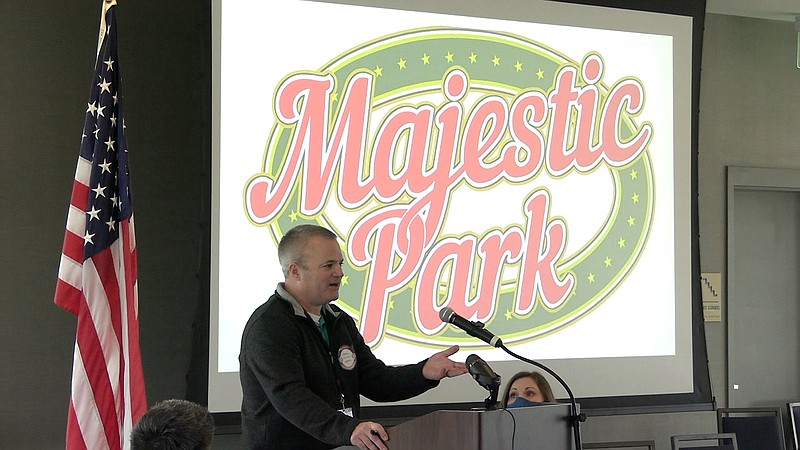 With the kickoff to Majestic Park's inaugural season less than a month away with the Dugan Invitational collegiate tournament Feb. 3-6, the new baseball park looks to keep Hot Springs bustling this spring and summer with a full tournament and league schedule.

The park, located at Carson and Belding streets, on the site Babe Ruth attended his first spring training as a Red Sox player in 1914, will play host to a recreational draft league for area youths, starting with age 5-6 T-ball, as well as USSSA travel baseball tournaments, fast-pitch softball, and the Great American Conference college baseball championship.

Derek Phillips, general manager of Majestic Park, addressed the Hot Springs National Park Rotary Club's weekly meeting at the DoubleTree by Hilton Hot Springs, Wednesday, noting, "We want this to be the premier place for baseball in Arkansas, and we've built the facility to do it."

Phillips, former athletic director of the Hot Springs Boys & Girls Club, who has been involved in recreational programming over 25 years, said the fall schedule has not been released yet but his request calendar looks to be much the same as the spring and summer.

"It's going to be a busy place, a lot of people in town. I'm really excited about what all we were able to accomplish in our first year in attracting tournaments. I mean, a huge part of that is Hot Springs. People want to come here," he said.

"We built an amazing park people want to play at. You can go do some fun stuff," Phillips said. "With all the fun things to do here, it's a really good match."

Phillips noted his longtime, firm belief that Hot Springs should be "the place" to host a premier tournament facility.

"People come to play for two and three and four days, you know, they want to do other things," he said. "These college teams that are coming, they're going to want to go to the track and to Mid-America and all these places and do fun things downtown. You know, there's a lot of cool stuff for them to do and it's just a really good place in Arkansas."

The local history is also a huge draw, he said. The park is part of the Spa City's rich history as "The Birthplace of Major League Baseball Spring Training," which is showcased through the Historic Hot Springs Baseball Trail guided tour.

Majestic Park will feature historic markers located throughout the park that highlight the Hall of Fame players who once haunted the grounds, as well as an 8-foot bronze statue of Babe Ruth that will be one of only three in the world, according to Visit Hot Springs.

"It's going to be beautiful," he said. "It's going to really set us apart from other parks. We're not just going to be just a recreational ball facility. ... Just the amazing history you can't find anywhere else."

The park also captures that history in its naming of the fields. The Babe Ruth, the largest of the five at 400 feet dead center, on which the college teams will play, as well as the Hank Aaron, Jackie Robinson, Cy Young, and Honus Wagner fields. Phillips said he is very proud of the finished product.

"Those are some of the most famous names in the history of baseball, and those players all played in Hot Springs," he said. "It's unreal. You just can't find (that) anywhere and we don't even have a major league team in Arkansas, yet we had this kind of history here in our city. And we're trying to make sure that people know that and show that off."