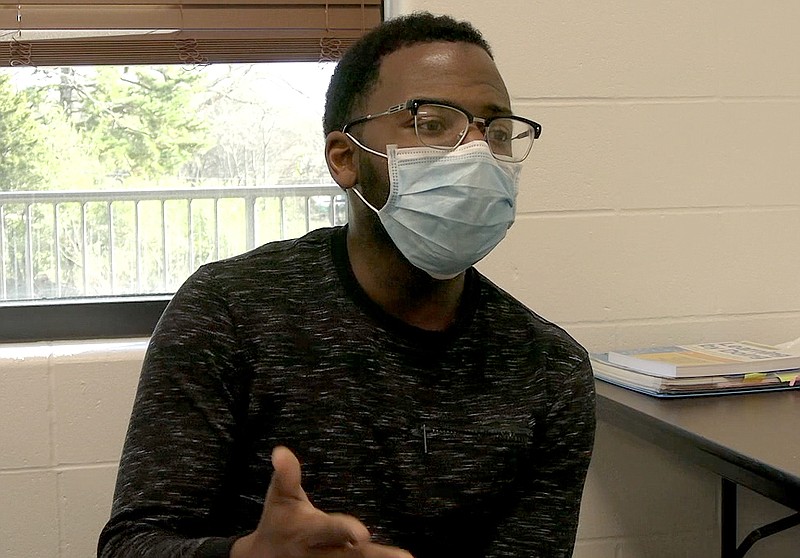 Marsalis Weatherspoon, president of the local branch of the NAACP, discusses its upcoming Martin Luther King Jr. events Wednesday inside his classroom at Hot Springs’ Main Street Visual & Performing Arts Magnet School, where he is a teacher. - Photo by Tyler Wann of The Sentinel-Record

The National Association for the Advancement of Colored People Unit No. 6013, Hot Springs Branch, will hold its annual MLK Prayer Breakfast virtually again this year due to COVID-19 restrictions, its president said Thursday.

Marsalis Weatherspoon said this is their second year going virtual, and they are trying to create the same ambiance as an in-person gathering.

"Everybody has their food at their separate homes or wherever they are," he said. "You know, they might have pancakes, or waffles, or eggs, or whatever they've got. They might have coffee or tea or orange juice. But it's a time to be together, even though we're separate, and so we do everything we can to create that atmosphere."

"Just everybody coming together for the good of the community," he said.

With such issues as social injustice and minority rights still at the forefront of the nation's consciousness, this year's celebration will take on a more active and aggressive approach with the theme, "Not just a celebration: We want legislation!"

"The theme is actually adopted from the words of Martin Luther King III, which is Martin Luther King Jr.'s son," he said. "A couple of weeks ago, he said, 'No celebration without legislation,' and that really resonated with us as an executive committee, and what we needed in this moment."

Weatherspoon said a lot of the time these events can become "dog and pony shows," in which people seem to go through the motions while talking about unity, peace and harmony, and not about change for the better.

"You know, what are we actually doing to bring that about?" he said. "I definitely want to see legislation passed, particularly the voting rights -- John Lewis Voting Rights. We want to see some of these legislative, voting maps that have been drawn just done away with.

"Of course, the Arkansas State Conference of the NAACP has sued the state of Arkansas about these redistricting maps because they're completely unfair and they're completely disenfranchising the Black people. So we want to see actual laws that comport with what we want to see in the world, and that was what this particular theme was about this year."

The event's keynote address will be given by Kristen Barnes, assistant director of Faculty of Diversity & Inclusion at Columbia University in New York City. As a first cousin to Weatherspoon, he said he knows her pretty well.

"She grew up in Memphis, Tennessee, but we would go back and forth," he said. "They would come to Hot Springs in the summer and we would go up to Memphis in the summer. ... She's a beautiful young lady and she's done a lot. She's not given the spot just because she's my cousin -- she's actually done the work, you know.

"She's been involved in social justice at George Washington University, working that NAACP, and now she's in the chapter up there in New York City working. She's definitely walked the walk as it relates to social justice and knows intimately what we do as an association."

A news release for the event said, in part, "White supremacy not only dons the hood and robe. It also takes the form of voter suppression, political obstructionism and grandstanding and the unprecedented Capitol Insurrection. These actions pose a literal threat to our institutions and our democracy. ... The mission of the National Association for the Advancement of Colored People is to secure the political, educational, social, and economic equality of rights in order to eliminate race-based discrimination and ensure the health and well-being of all persons."

Weatherspoon said there are a number of events planned in addition to the prayer breakfast, with the Virginia Clinton Kelley Democratic Women's Club and the Arkansas Black Mayors Association sponsoring various events and activities.

On Monday, a viewing of Congressman John Lewis' documentary, "Come Walk In My Shoes," will be held at Hot Springs Central Theatre, from 3 to 5:30 p.m. On Tuesday, following prayer and the Mayors Summit in the morning session, panel and town hall discussions will be held from 2:30 to 4:30 p.m.

The Hot Springs Dance Troupe, a company of dancers representing the Hot Springs School District, which began in 2015, will give its "The New Normal" performance at the prayer breakfast. The performance is inspired by the "overwhelming amount of traumatic and unprecedented events that have occurred in the last couple years," and explores the exhaustion of "hearing news broadcast after news broadcast," the release said.

"The HSDT dancers researched and chose news broadcast stories and specific portions to layer over the music composed by Zach Hemsey, and compiled by HSDT Director, Amy Bramlett Turner," it said. "This dance brings an overwhelming perspective of our new reality. The HSDT hopes to bring awareness and hope to the audience because we truly believe movement has the power to create change."

The annual Martin Luther King Jr. Parade, entitled "What Are You Doing For Others?" will be held Monday at 10 a.m. in downtown Hot Springs. Executive director of Hot Springs Community Services Office, Leslie Barnes, will serve as grand marshal.

Parade participants will line up at 8 a.m. on Whittington Avenue. Immediately following the parade, festivities will continue at the Hot Springs Convention Center, in Horner Hall, where program speaker, Pastor Kelly Allen Green of Roanoke Missionary Baptist Church in Hot Springs, will speak.