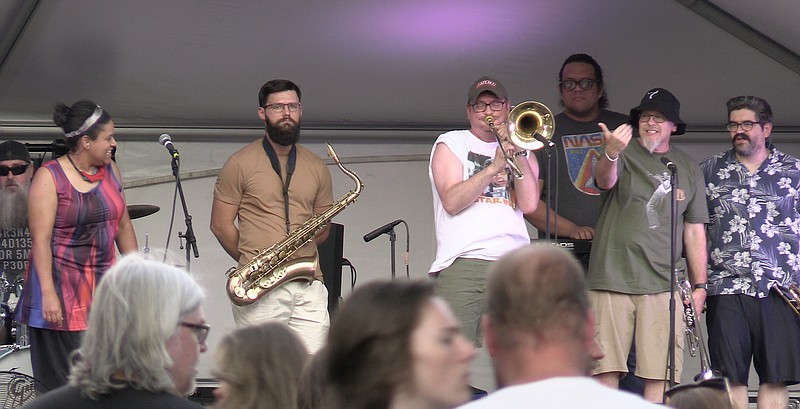 The Big Dam Horns performs at Bridge Street LIVE! on June 23. - Photo by Donald Cross of The Sentinel-Record

The Bridge Street LIVE! series of June concerts, which concludes tonight, was "a tremendous success," according to the director of marketing for Visit Hot Springs, which hosted the events.

"I would say a better turnout than we thought," Bill Solleder told The Sentinel-Record. "Based on the weather, it's been really uncomfortably hot. People obviously are excited to get outside and see some free LIVE! music.

"We had great programming that was very diverse, from soul and Motown and pop to zydeco and country. We've had great crowds; I think our largest crowd was 2,300 and our smallest crowd was about 1,500."

Bridge Street LIVE! is also an opportunity for nonprofits to raise awareness about their causes. Visit Hot Springs invited multiple organizations to the event during the June series, such as the Spa Running Festival and the Literacy Council, Solleder said.

"Big Poppa Bubble came out to our inaugural event ... his art form is, well, bubbles. He makes giant, huge bubbles and flies them over the crowd," Solleder said.

This marks the second year that Visit Hot Springs has put on the block party-style event with live music, varying entertainment, and vendors.

"Last year during COVID we wanted to be able to bring events back to Hot Springs, so all of us together thought 'well let's do an event outside,'" Solleder said. "It is ... a way for people to be outside and feel safer, in a more healthy environment. And the success last year was tremendous, so we decided to bring it back this year."

The city worked with VHS to expand the boundaries of the Bridge Street Entertainment District to make it easier for not only the organizers, but also outside groups, to use the district for events, Solleder said.

"We feel it's a great location ... it doesn't impact traffic all that much. It's only just for a few hours. I encourage others to look at the district as a potential place to hold their events," he said.

"The comments that I get from folks that attend the events are that they just love their hometown. And I hear that so much ... they say, 'Bill, this is such a great event, it makes me proud of Hot Springs that we can have a block party-style event like Bridge Street LIVE!'," he said.

"And then I speak to so many people from out of town who are here vacationing, or visiting, or maybe they're here at the Hot Springs Convention Center and it's something for them to do after their conventions ... to wander into the Bridge Street Entertainment District and enjoy some free fun ... all of their sentiments are always, 'Wow, Hot Springs is such a cool place to come to. You got so much going on. I love coming to conferences here because there's so much to do,'" he said.

"And then there's unsuspecting tourists who just happen to be in town and just come across it. It's just great fun and really shows how quirky and unique Hot Springs is."

Solleder also hinted at the possibility of a Bridge Street LIVE! series in October this year.

"We would love to host Bridge Street LIVE! this October. We're not sure if we're going to be able to do that. But there's discussions ... I would love for that to happen. If not -- we haven't confirmed this as well -- it most likely will be back in June 2023," he said.

Tonight's event promises to be exciting, with retail and food vendors, returning favorite performers and some new acts and amusements, as well.

"We'll do something we've never done before and that is feature the art of DJing. We have three DJs coming out, DJ Abnormal, DJ Terence and DJ Kramer will be coming out," Solleder said. "Big Poppa Bubble again will be back. And I think we're going to bring in a giant waterslide. One of those inflatable waterslides ... this year, because it's been hot, we've had a little sprinkler going so people could cool off, which has been a huge hit for the kids -- it'll be free and fun for all." 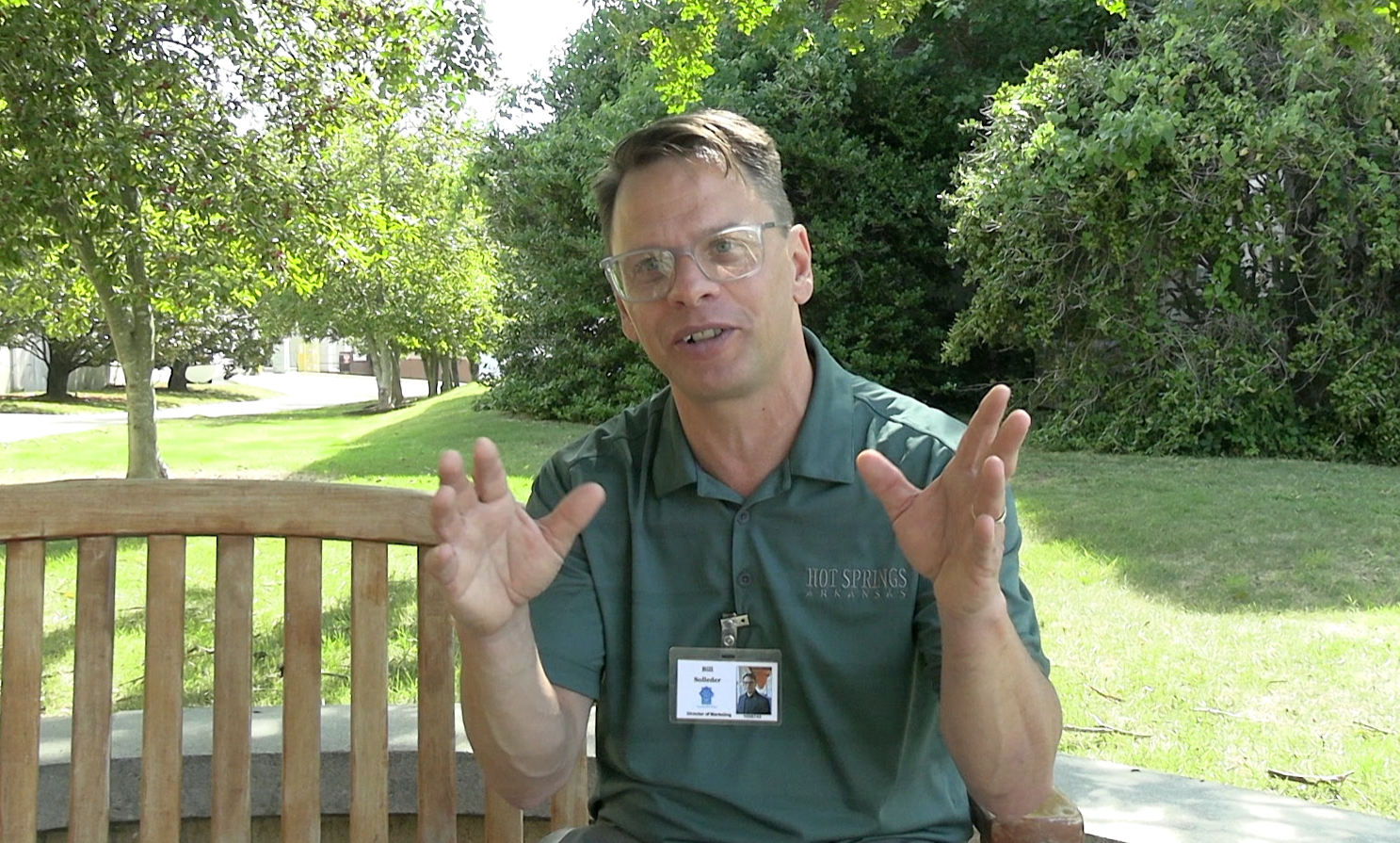 Bill Solleder, Visit Hot Springs director of marketing, describes the success of Bridge Street LIVE! and what to expect at today's event and beyond. - Photo by Andrew Mobley of The Sentinel-Record 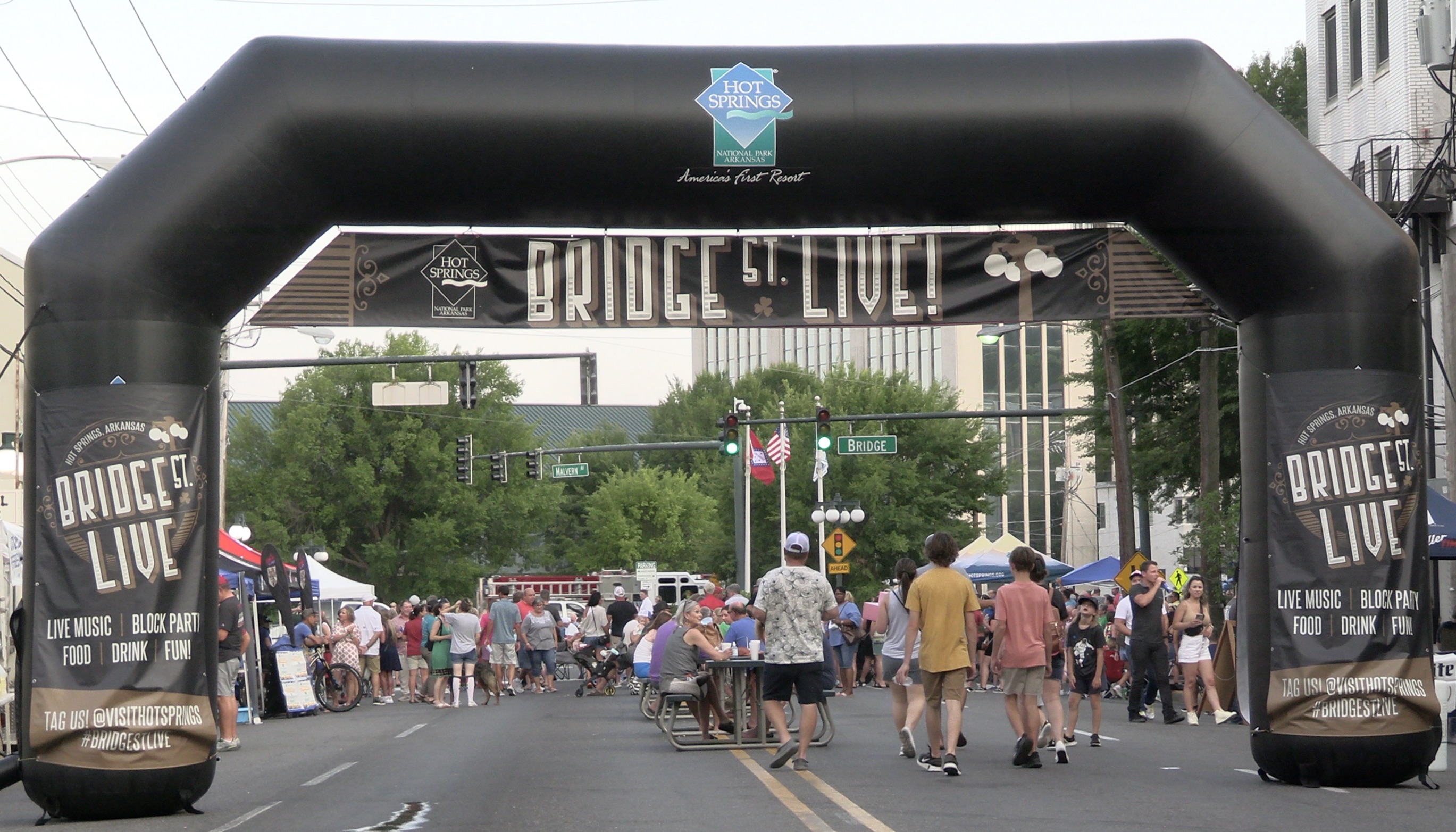 The entrance to Bridge Street LIVE! near Malvern and Bridge. - Photo by Donald Cross of The Sentinel-Record