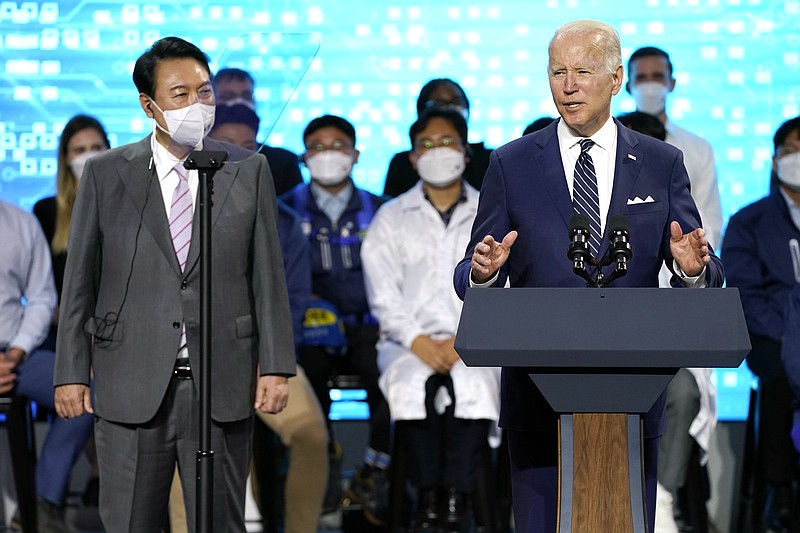 PYEONGTAEK, South Korea -- President Joe Biden opened his trip to Asia on Friday by touring a South Korean computer chip factory that will be the model for a plant in Texas, holding it out as an illustration of how deeper ties with the Indo Pacific can fuel technological innovation and foster vibrant democracies.

"So much of the future of the world is going to be written here, in the Indo Pacific, over the next several decades," Biden said. "This is the moment, in my view, to invest in one another to deepen our business ties, to bring our people even closer together."

Biden's message was pitched toward the promise of a better global tomorrow, yet also aimed at U.S. voters amid political challenges at home -- such as inflation driven higher by the chip shortage -- as he tries to show his administration is delivering on the economy.

The Democrat's first visit to Asia as president came as polling released Friday by The Associated Press-NORC Center for Public Affairs Research found Biden's U.S. approval rating at 39%, the lowest of his presidency. The survey also found deepening pessimism about the economy and the state of the United States -- especially among Democrats.

"These little chips," Biden said in remarks after he toured the plant, "are the key to propelling us into the next era of humanity's technological development."

The president is seeking to promote greater business collaboration among democracies with overlapping values, seeing it as way to maintain the benefits of a globalized economy in a way that benefits American workers and leads to greater foreign investment in the U.S. He is to appear Sunday in Seoul with the chairman of Hyundai Motor Group to highlight the company's decision to invest in a new electric vehicle and battery manufacturing facility in Savannah, Georgia.

Throughout his five-day visit to South Korea and Japan, Biden is making his case for how a U.S. that can work with its closest allies will be stronger at home and abroad. In his remarks Friday, Biden did not mention China, which has emerged as a prime competitor with the U.S., and he stressed the value of alliances that currently exclude that country.

Greeting Biden at the plant was South Korea's new president, Yoon Suk Yeol, and Samsung Electronics Vice Chairman Lee Jae-yong. Yoon is a political newcomer who became president, his first elected office, just this month. He campaigned on taking a tougher stance against North Korea and strengthening the 70-year alliance with the U.S.

Before Biden spoke, Yoon said that he hoped the U.S.-South Korea partnership evolves into an "economic and security alliance based on cooperation in advanced technology and supply chains."

The chip plant showed a bit of the unique nature of the manufacturing as visitors were required to don white laboratory coats and blue booties to help keep the facility clean. Biden and Yoon, who did not wear protective clothing, saw a demonstration of the machinery.

At one point during his tour, Biden received an in-depth explanation of a KLA inspection system on the Samsung plant floor. The California-based company is a major supplier to Samsung's semiconductor operations. After a worker named Peter explained the ins and outs of the machinery, Biden advised him, "Don't forget to vote," when he returns home to the United States.

In closing, Biden slipped and thanked "Moon," who was South Korea's immediate past president, Moon Jae-in, who held the office for several years before Yoon's recent election. Biden quickly corrected the slip-up.

"President Moon, Yoon, thank you for everything you've done so far," Biden said.

Part of the computer chip shortage is the result of strong demand as much of the world is emerging from the coronavirus pandemic. But virus outbreaks and other challenges also have caused the closure of some semiconductor plants. U.S. government officials have estimated that chip production will not be at the levels they would like until early next year.

Global computer chip sales totaled $151.7 billion during the first three months of this year, a 23% jump from the same period in 2021, according to the Semiconductor Industry Association.

More than 75% of global chip production comes from Asia. That's a possible vulnerability the U.S. hopes to protect against through more domestic production. There's $52 billion worth of government investment in the sector in a bill being negotiated in Congress.

The risk of Chinese aggression against Taiwan could possibly cut off the flow of high-end computer chips that are needed in the U.S. for military gear as well as consumer goods. Similarly, the hermetic North Korea has been test-firing ballistic missiles amid a coronavirus outbreak, a possible risk to South Korea's manufacturing sector should the brinkmanship escalate.

In terms of chip production, China leads the global pack with a 24% share, followed by Taiwan (21%), South Korea (19%) and Japan (13%). Only 10% of chips are made in the U.S., according to the Semiconductor Industry Association.

Samsung announced the plant in Taylor, Texas, in November 2021. It hopes to begin operation in the second half of 2024. The South Korean electronics giant chose the site based on factors including government incentives and the "readiness and stability" of local infrastructure.

The White House said in a fact sheet that semiconductor companies have announced nearly $80 billion in U.S. investments through 2025. That sum includes $20 billion for Intel's plant outside Columbus, Ohio, up to $30 billion by Texas Instruments, a $1 billion expansion by Wolfspeed in New York and investments by Global Foundries and SK Group. 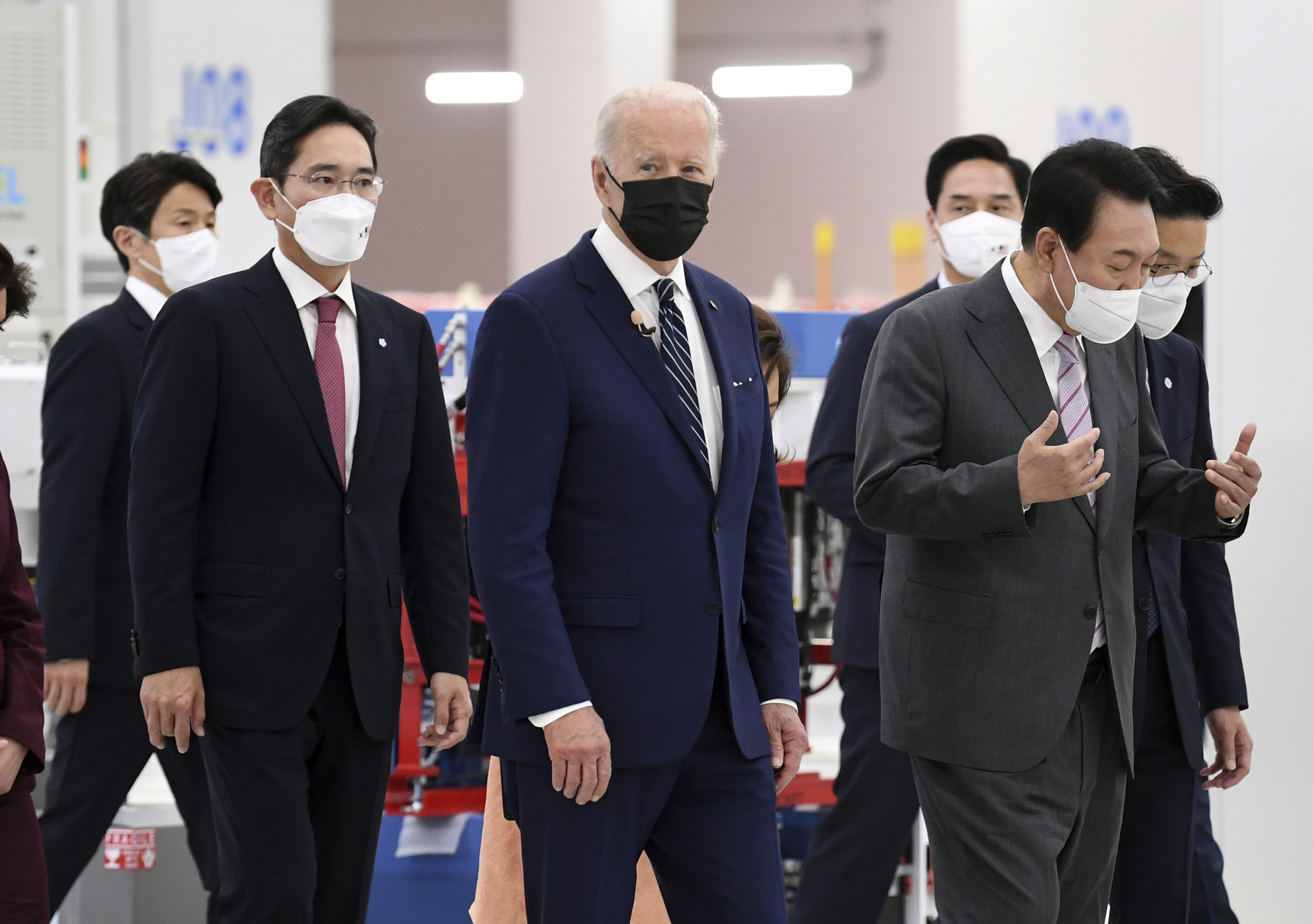 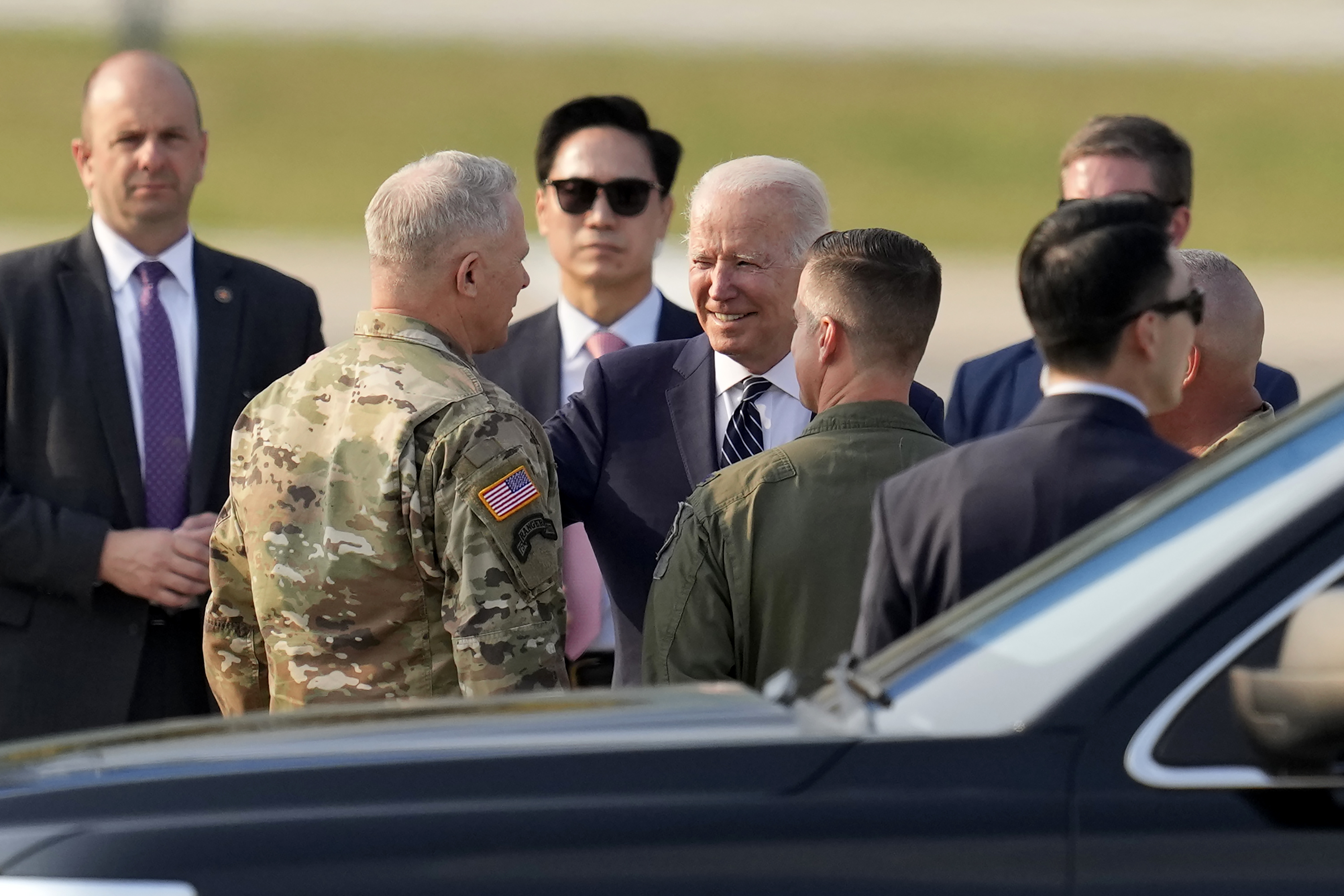 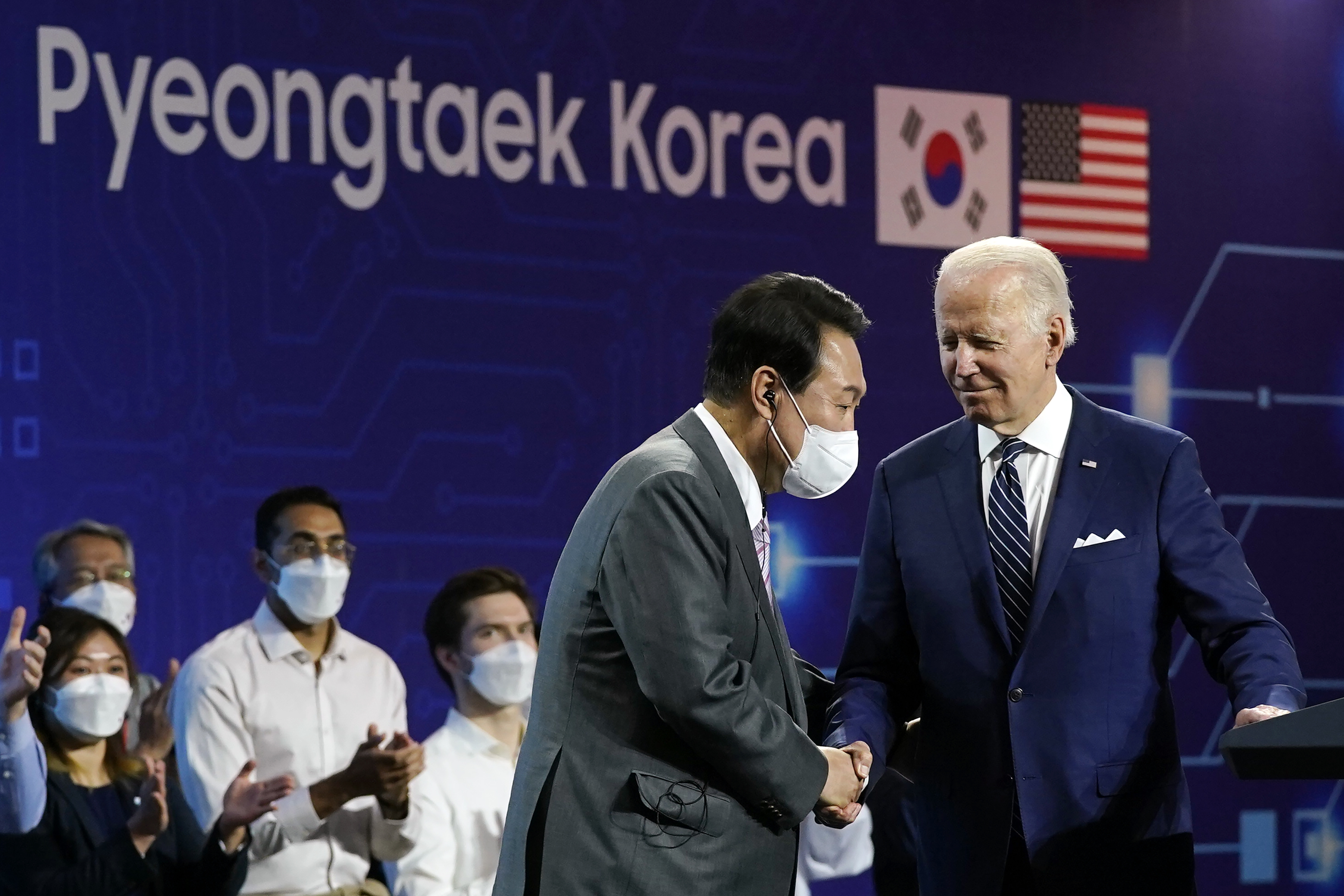 Protesters stage a rally to oppose a visit by U.S. President Joe Biden in Seoul, South Korea, Friday, May 20, 2022. Biden on Friday opened his Asia trip by highlighting the computer chip shortage that has bedeviled the world economy, touring a Samsung computer chip plant that will serve as model for a $17 billion semiconductor factory the Korean electronics company plans to open in Texas. (AP Photo/Ahn Young-joon)

Protesters stage a rally to oppose a visit by U.S. President Joe Biden in Seoul, South Korea, Friday, May 20, 2022. Biden on Friday opened his Asia trip by highlighting the computer chip shortage that has bedeviled the world economy, touring a Samsung computer chip plant that will serve as model for a $17 billion semiconductor factory the Korean electronics company plans to open in Texas. The signs read "We denounce North Korea policy of South Korean President Yoon Suk Yeol." (AP Photo/Ahn Young-joon) 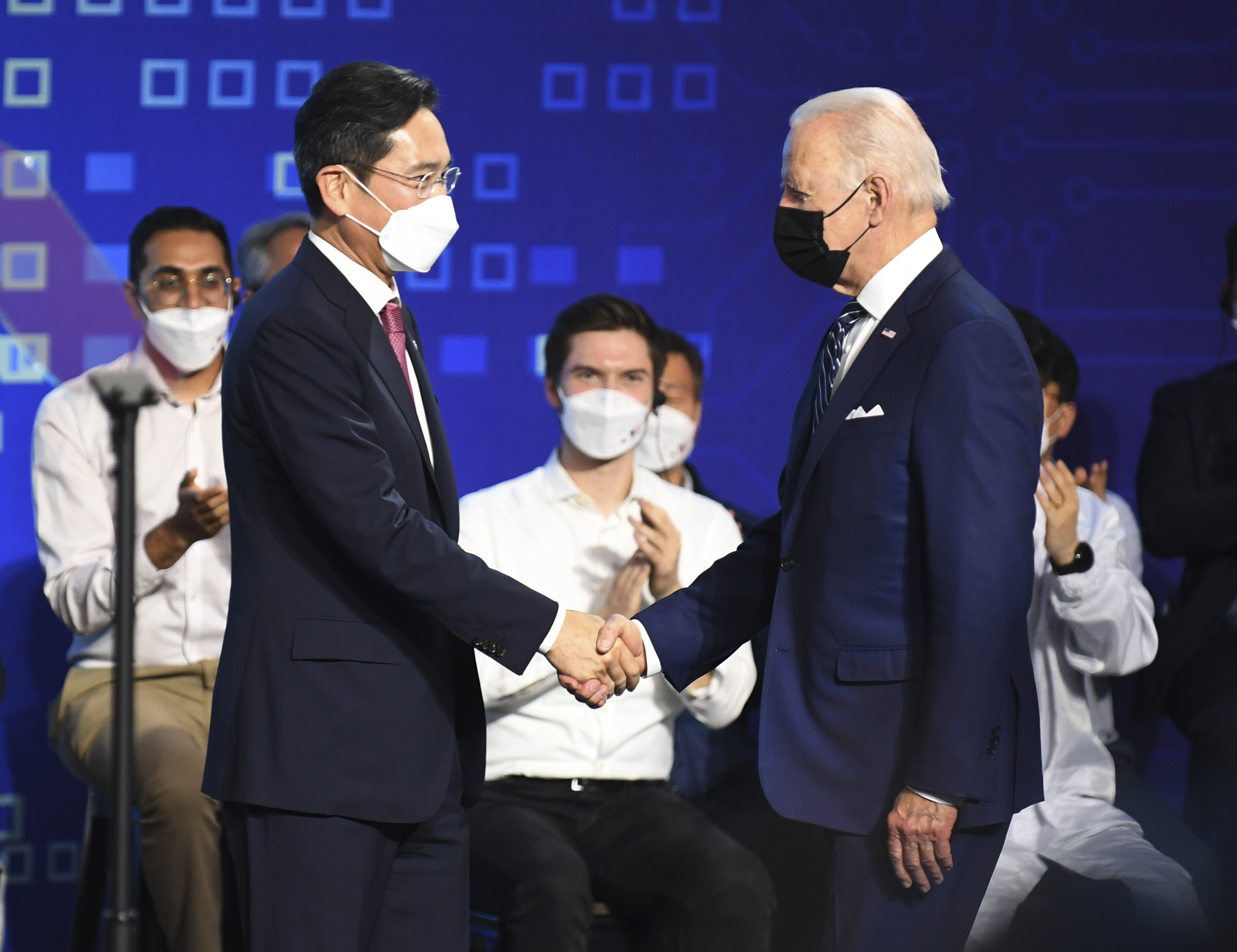