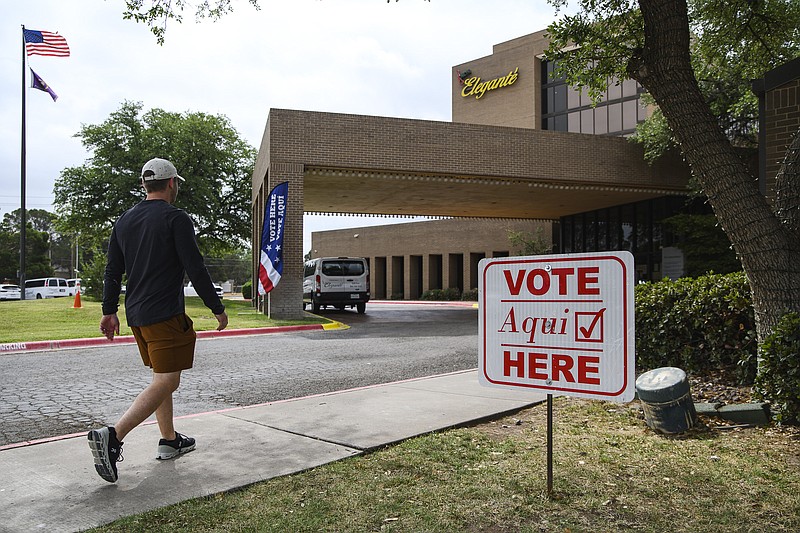 Eli Hartman/Odessa American via AP Voter Austin Hall walks into a polling location to cast his vote in the joint primary runoff election on Tuesday in Odessa, Texas.

ATLANTA -- Former Sen. David Perdue said he called Georgia Gov. Brian Kemp to congratulate him on his victory in the Republican gubernatorial primary.

Perdue had been recruited by Donald Trump to challenge Kemp, who had attracted the former president's wrath for rejecting his baseless claims of widespread voter fraud. But Perdue never gained much traction in the race and was easily beaten by the incumbent Tuesday.

Perdue said he would work to ensure Kemp beats Democratic nominee Stacey Abrams in the November election, a rematch of their contest four years ago.

"Everything I said about Brian Kemp was true, but here's the other thing I said was true: He's a much better choice than Stacey Abrams. We are going to get behind our governor," Perdue said.

"We are going to do everything we can to make damn sure Stacey Abrams doesn't take over this state and let the woke mob take over our beloved children and grandchildren," he said.

Bush is the only member of his famous family still in office, but the loss means he will now exit in January. That will leave the Bush dynasty out of elected office for only one of the few times in the last 40 years.

The coming end of the Bush era -- at least for now -- came at the hands of a two-term incumbent still dogged by a 2015 felony indictment and a separate FBI investigation into accusation of corruption. But importantly in Texas, Paxton had the backing of Donald Trump -- the former president who has mocked and antagonized the Bush family on his way to taking their mantle as the GOP's standard-bearer.

Paxton, who has denied wrongdoing, is now within reach of a third term in Texas, where a Democrat hasn't won statewide office in nearly 30 years.

Greene, a celebrity among the GOP's right-wing fringe, will be on the ballot again in the November general election. She will face the winner of a three-way Democratic primary in northwest Georgia's 14th District, a seat drawn to give Republicans a huge advantage.

Jennifer Strahan and other Republican challengers sought unsuccessfully to convince voters that Greene's combative rhetoric and willingness to embrace baseless conspiracy theories did little to benefit her constituents.

Greene raised more than $9 million to defend her seat and spent more than $6.6 million in the primary fending off attacks from within her own party. She remained on the ballot after voters mounted a failed effort to disqualify her by claiming she encouraged the Jan. 6 Capitol insurrection and riots that disrupted Congress' certification of Joe Biden's presidential victory.

ATLANTA -- Georgia's Republican attorney general has defeated a GOP primary challenger who entered the race with the backing of former President Donald Trump.

Gordon said he wanted an investigation into the 2020 election and blamed Carr for not doing enough. Carr said flatly that Trump and Georgia's two Republican senators lost that election and there was no need to investigate.

Appointed to the attorney general's office by the governor in 2016, Carr is seeking his second full term. He counts his top achievements as prosecuting human trafficking, securing a $636 million opioid settlement, and defending the 2021 Georgia voting law.

Walker is a political newcomer but has nearly unmatched name recognition in Georgia from his days as a college football running back. He led the University of Georgia football team to a national title during the 1980 season and won the Heisman Trophy in 1982.

Trump, a close friend of Walker's, backed his run despite questions about Walker's business dealings and history of violence against women. Walker has been open about his long struggle with mental illness and acknowledged violent urges.

He won the primary despite skipping debates with his Republican opponents and making some gaffes.

ATLANTA -- U.S. Sen. Raphael Warnock won Georgia's Democratic primary as he seeks to hold on to his Senate seat in the upcoming midterm elections.

The junior senator and pastor is seeking a full, six-year term in the Senate after winning a special election in 2021 for the final two years of former Republican Sen. Johnny Isakson's term. Republicans believe Warnock is vulnerable and are targeting his seat in their efforts to regain a Senate majority.

Warnock is the senior pastor at Ebenezer Baptist Church in Atlanta, where the late Rev. Martin Luther King Jr. once preached. On Capitol Hill, he has attacked Republicans' push for tighter voting rules as "Jim Crow in new clothes."

In Georgia, he has stressed his work in bringing home funding for health care, national security research and other projects. He has also highlighted his efforts to try to cap the cost of insulin and temporarily suspend the federal gas tax.

Abrams became a star in the Democratic Party after her first gubernatorial election and ran unopposed in this year's primary. She has become a leading advocate for voting rights and is credited with laying the organizational groundwork for Joe Biden to become the first Democratic presidential candidate to win Georgia in 28 years.

Abrams is likely to face either Kemp or former U.S. Sen. David Perdue in a November contest that is gearing up to be one of the nation's most expensive and closely watched.

The centerpiece of Abrams' platform is a call to expand Medicaid to all adults. But she is also highlighting her support for abortion rights and opposition to state laws abolishing the requirement for a permit to carry a concealed handgun in public.

Abrams has showed the ability to raise millions, but Republicans have raised the specter of her becoming governor to try to unify a party fractured by former President Donald Trump's attempts to unseat Kemp. 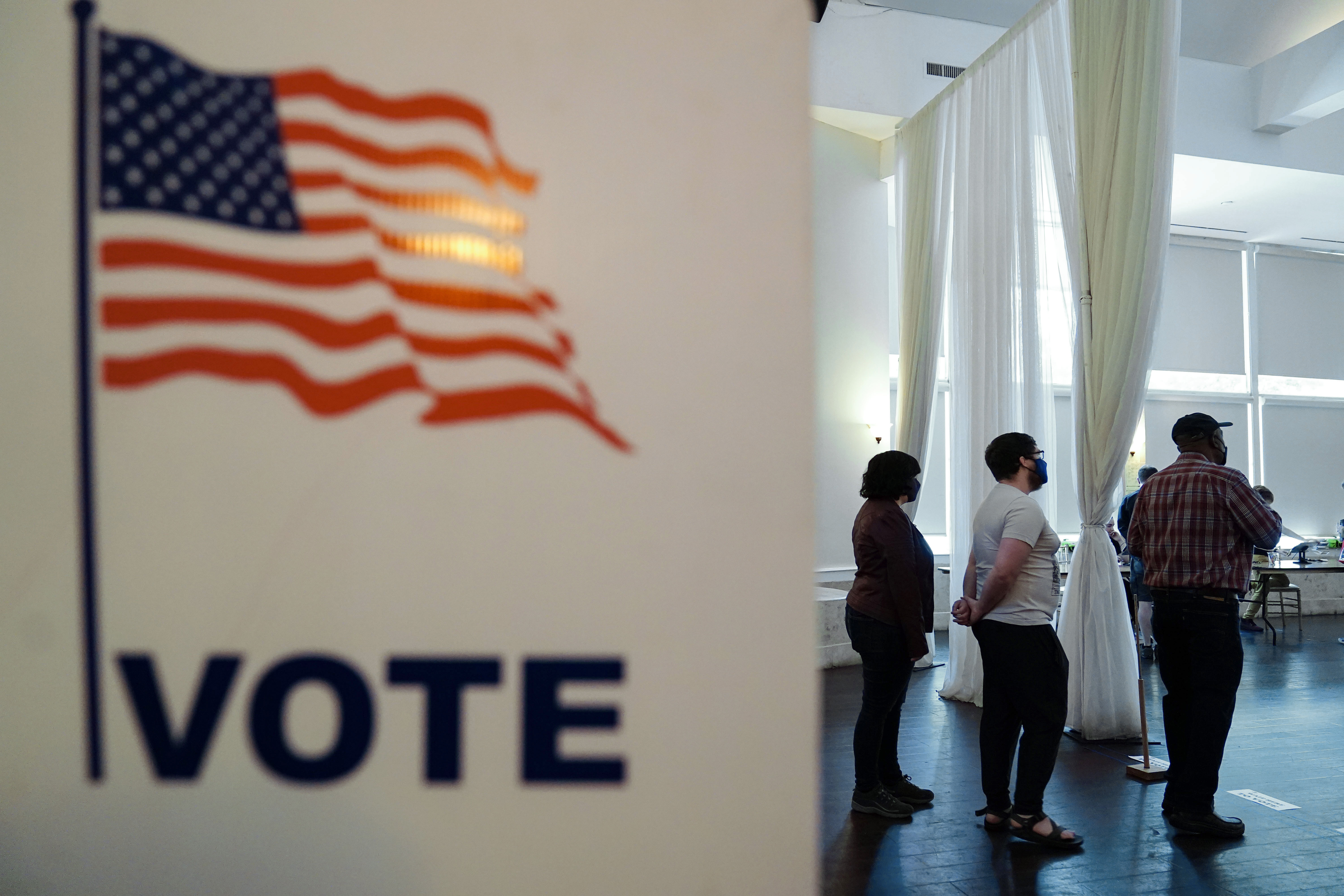 People wait in line to vote in the Georgia's primary election on Tuesday, May 24, 2022, in Atlanta. (AP Photo/Brynn Anderson) 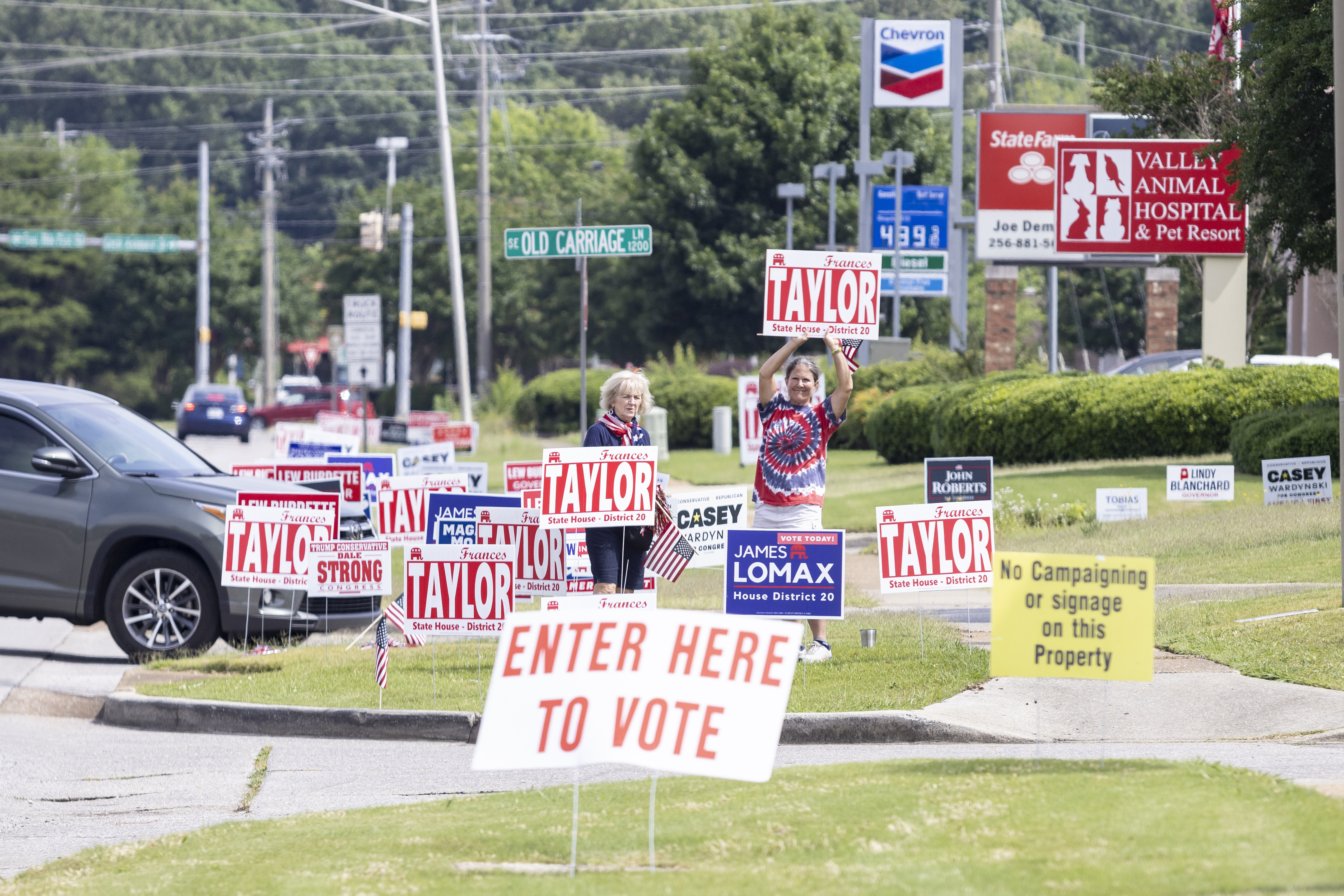 Campaign workers encourage votes for their local candidates near the Willowbrook Baptist Church polling station as Alabama votes in the state primary in Huntsville, Ala., Tuesday, May 24, 2022. (AP Photo/Vasha Hunt)