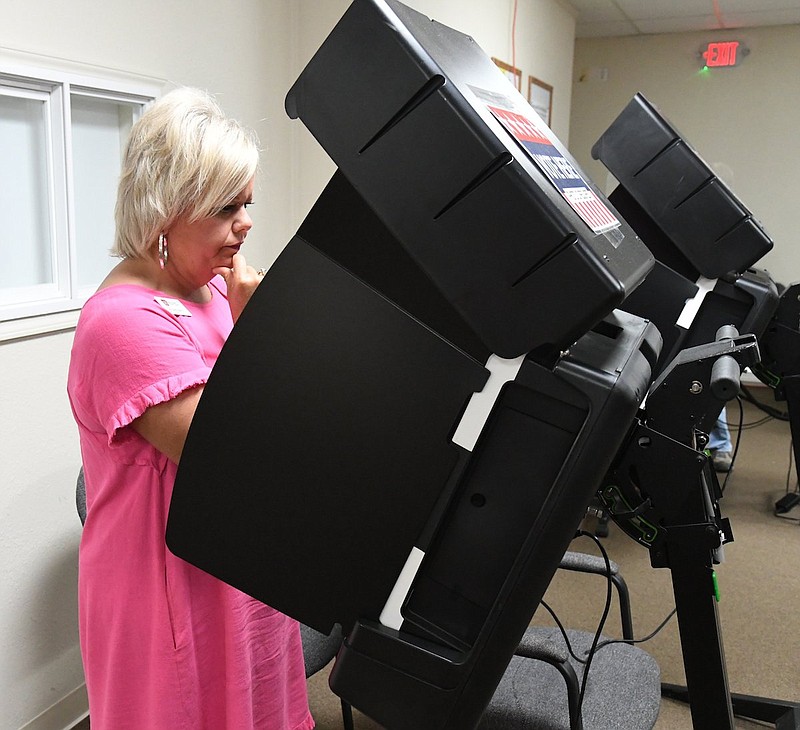 Brandi Bettis thinks over how to vote during the election.

McKee outpolled Sample 5,122-4,827 despite the latter outspending McKee almost four to one. According to final but unofficial results from Garland County, county voters favored the six-term JP 4,490-4,091. Sample won the Saline County vote, but most of the new district is in Garland County.

Garland County Coroner Stuart Smedley turned back Justin Nicklas' challenge, outpolling the funeral home director 7,466-3,277. He built an almost four-to-one lead in the early and absentee vote, a gap he maintained after all 16 of the county's vote centers reported election day results. Nicklas spent more than $13,000 of his own money on the campaign, according to financial reports he filed with the county clerk's office.

Smedley told The Sentinel-Record he didn't reach the $500 threshold for filing monthly and preelection financial reports.

The District 7 JP race is headed to a runoff, as neither of the three candidates in the Republican primary secured a majority of the more than 1,000 votes. Incumbent John Paul Faulkner won a plurality and will face real estate broker Dayton Myers in the June 21 runoff.

The county's 22% turnout exceeded the previous three preferential primaries and nonpartisan general elections held in a year without a presidential election. More than 14,000 voters turned out, with 8,040 voting early or absentee. It was the six straight election where the early turnout exceeded election day turnout.