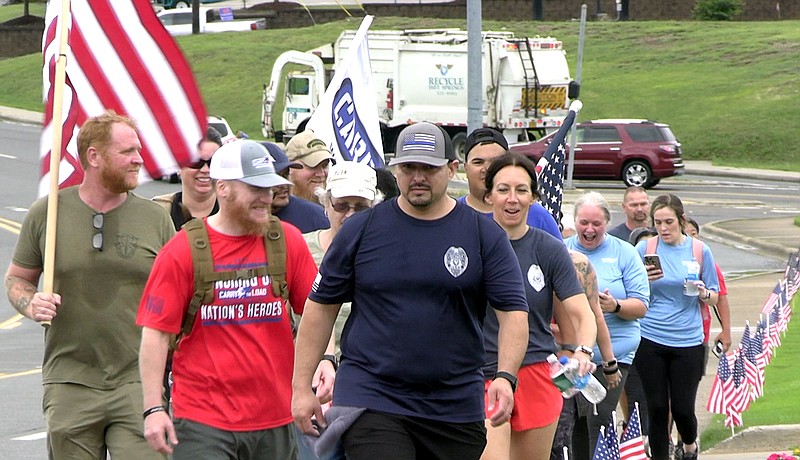 The relay nears the end of its Hot Springs leg. - Photo by Andrew Mobley of The Sentinel-Record.

Members of Carry The Load walked through Hot Springs Wednesday morning as part of a 20,000-mile national relay to honor and remember America's fallen soldiers and first responders.

The nonprofit provides active ways to connect Americans to the sacrifices of the nation's military, veterans, first responders and their families.

This year marks the organization's 10th Annual National Relay, which includes five routes crossing 48 states and 100 rallies over 32 days before culminating at the Dallas Memorial March on Memorial Day weekend. This is the first time Carry The Load has incorporated the fifth route, New England, which began in Burlington, Vermont, on May 4.

The Hot Springs relay began at the Hot Springs Police Department on Malvern Avenue and ended at the La Quinta Inn and Suites by Wyndham on Central Avenue. Wyndham is one of the organization's sponsors.

After leaving the HSPD, they stopped at the U.S. Navy SEAL Chief Petty Officer Adam Brown memorial near the Garland County Veterans Memorial and Military Park, then made about a 5-mile walk to the hotel, Crys Strine, La Quinta Inn and Suites by Wyndham front desk supervisor, said.

According to its website, Carry The Load was founded by veteran U.S. Navy SEALSs Clint Bruce and Stephen Holley and began in 2011 with a Dallas Memorial March with 400 participants and raised nearly $50,000 on Memorial Day.

"About 11 years ago ... they (said) 'We got to bring the true meaning back to Memorial Day.' They were SEAL members, they lost a lot of team members. Adam Brown is one of the team members that they lost. So they pack up, they head to West Point and from West Point they walked all the way back to Dallas ... they had a 20-hour rally," Beth Sundquist, one of the relay walkers, said.

"Ever since, it's just grown. The stories that you see, the stories that you hear -- it's heartfelt. It's humbling to know that I can ... walk from Burlington, Vermont, all the way to Dallas carrying my friends and family that I've lost," she said.

"We try to join them every year when they come by. It's a great cause. We've got ... one of our very own from the PD that we lost a couple years ago, Cpl. (Brent) Scrimshire," HSPD Officer 1st Class Omar Cervantes said.

"I came through Hot Springs last year as a part of the relay, and it was one of my favorite places to stop because everyone was just so welcoming and so adamant about continuing to remember those who have fallen in service," Chapel Tinius, a Carry The Load Memorial May National Relay team member, said.

Carry The Load raises funds to assist with the many challenges facing military personnel, veterans, first responders and their families. Peer-to-peer fundraising goes toward recovery services, such as counseling, adaptive training, service dogs, suicide prevention, job placements, home improvements, and scholarships for children of the fallen.

The goal this year is to reach $2 million in peer-to-peer fundraising.

"Go to carrytheload.org, and donate. There's 50 nonprofits that they are with and 94% of all money donated to Carry The load actually goes back to those nonprofits. You can't say that about a lot of charities. I think there's ... five or six full-time employees, and that is it. Everything else is volunteers," Sundquist said.

People of all ages can participate by walking with the National Relay team, attending a rally, hosting their own Carry It Anywhere event, organizing a youth Carry The Flag activity and fundraising. Registration is complimentary and encouraged at http://www.carrytheload.org/MemorialMay.

"For anyone who has lost someone in service to our country, they will tell you that participating in Carry The Load has made a lasting impact on their life," Stephen Holley, co-founder, president and CEO of Carry The Load, said in a news release. "There's nothing like the human touch. Being in that environment, walking side-by-side one another, and sharing stories demonstrates beyond words that people do care." 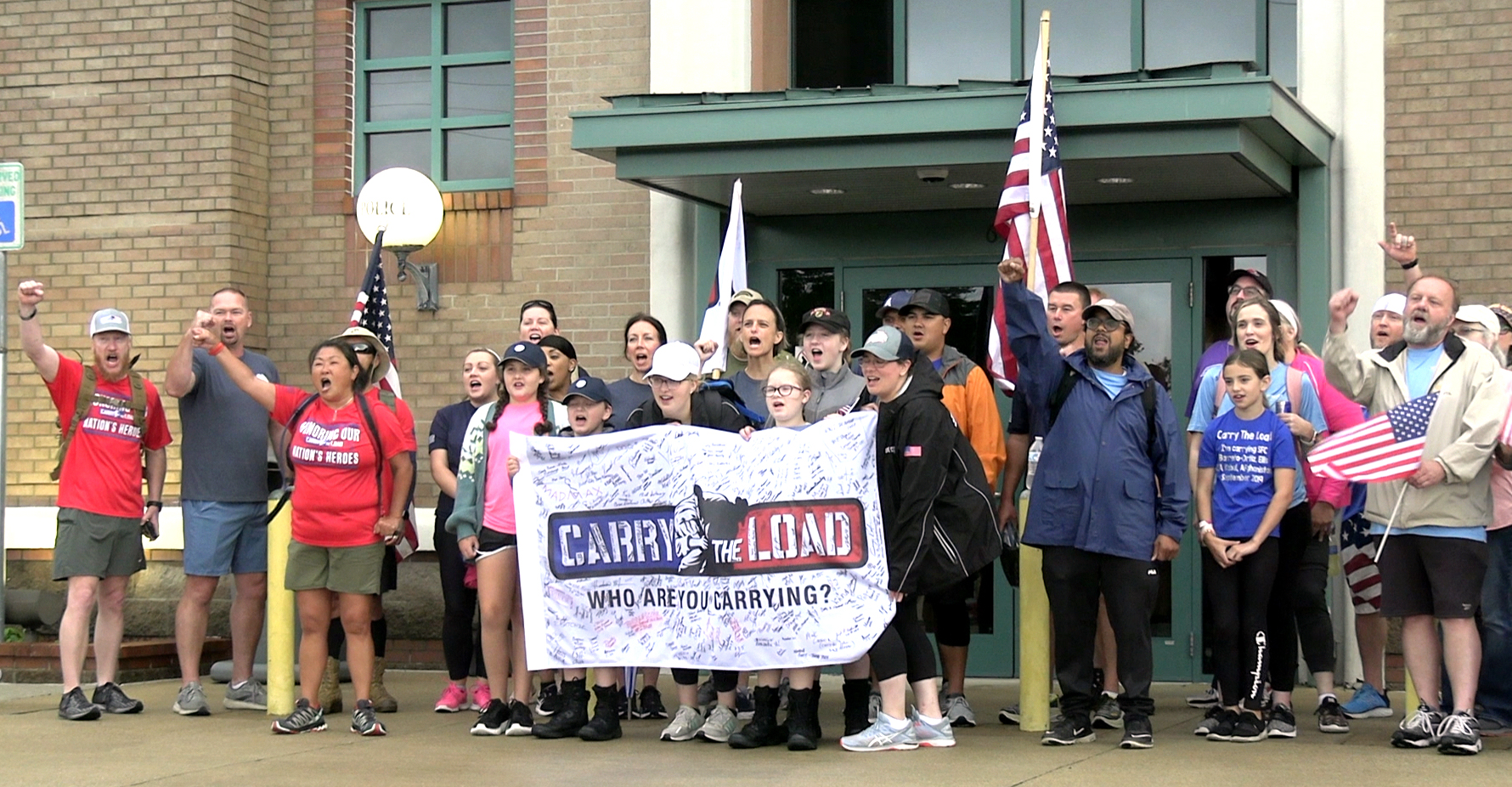 The relay begins at Hot Springs Police Department. - Photo by Andrew Mobley of The Sentinel-Record. 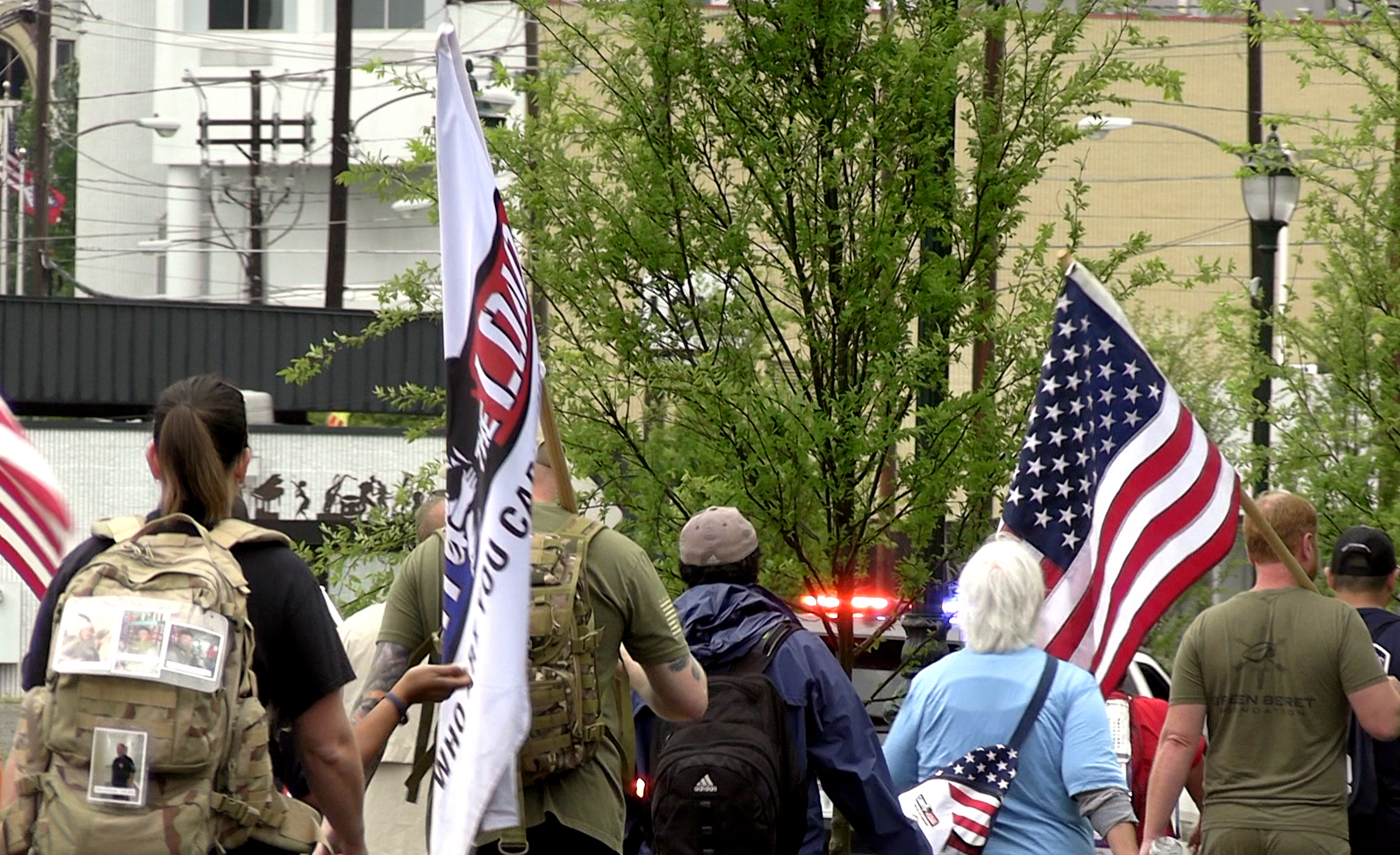 The relay makes its way toward downtown Hot Springs. - Photo by Andrew Mobley of The Sentinel-Record.