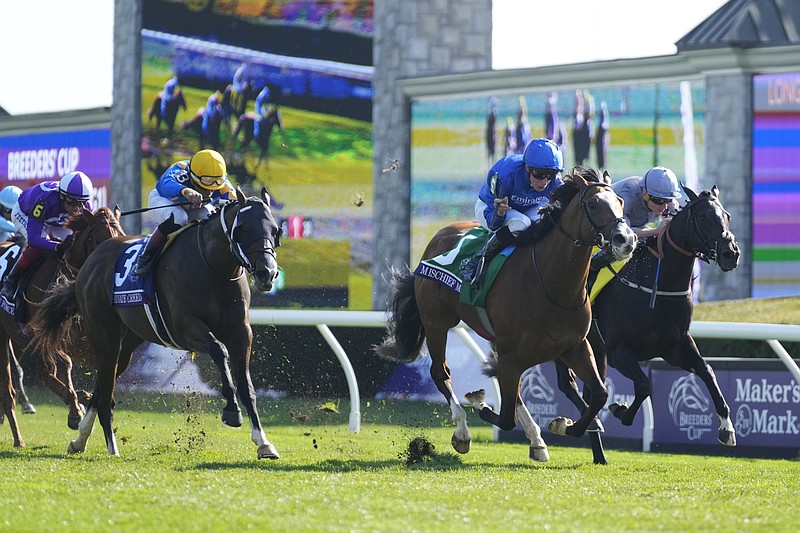 Trainer Tim Martin no doubt enjoyed the buildup for Friday's Breeders' Cup Juvenile Turf at Keeneland, in which his unbeaten Tyler's Tribe was entered.

It proved an humbling experience for the Sharp Azteca gelding, however, previous five-time winner by a combined 59 3/4 lengths. Tyler's Tribe, racing without Lasix in his first start outside Iowa, where the drug is permitted, bred profusely, the first such episode concerning the horse. Martin, 59, a trainer since 1985, became enraged at the Breeders' Cup regulation banning Lasix as a race-day medication.

"What are we doing? Do we care about the horse?" he is quoted in horseracingnation.com, a Louisville-based website. "I just don't understand it. If the horse needs Lasix, why not give him Lasix?"

Stabilizing enough by nightfall, Tyler's Tribe had his evening meal. Martin, meanwhile, said he had no reason to believe a bleeding problem would arise during the race.

"He didn't show me any sign in workouts. When I breezed him, no bleeding," the trainer said. "I didn't see that coming."

Tyler's Tribe was shipped from Keeneland to the local Royal Training Center, where he will be given time off. Martin co-owns the facility with his brother, Bill.

Tyler's Tribe is owned by Martin and Tom Lepic, named after Lepic's 8-year-old grandson, Tyler, who was recently declared cancer-free after a two-year battle with leukemia.

Martin has dreams of running in the Kentucky Derby next spring, though Tyler's Tribe has never raced beyond six furlongs. The trainer is looking toward the Jan. 1 Smarty Jones Stakes (one mile) at Oaklawn, possibly leading to future races in the local track's Derby prep schedule.

Oaklawn does not have a grass course, not that Martin sees the gelding returning to the surface any time soon.

"When he went on the turf, he started washing out," Martin said. "He's a very smart horse. I don't know if he didn't want to run on it, but I saw him sweating all over. He didn't want to load and he was sweating real bad. I didn't like that at all."

Per Equibase records, Martin has 1,142 training victories, posting nine wins from 122 starters at last year's Oaklawn meeting for earnings of more than $354,000. Tyler's Tribe has earned $306,294, selling for $34,000 to Martin and Lupic at an October 2021 Iowa yearling sale. Kylee Jordan rode Tyler's Tribe in the Breeders' Cup.