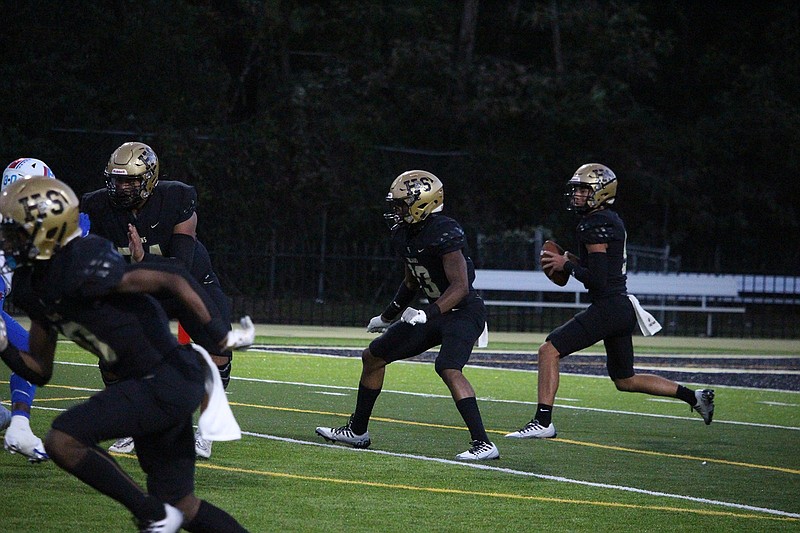 Hot Springs quarterback Matthew Contreras drops back in the pocket against Little Rock Parkview Sept. 22 at Joe C. Reese Stadium. The Trojans head to Little Rock Mills Friday night for a playoff game. - Photo by Krishnan Collins of The Senitnel-Record

Years ending in "2" tend to be noteworthy for the Hot Springs High football program.

This is the 50th anniversary of a co-state championship with Jonesboro that the Trojans shared after the Arkansas Activities Association halted an overtime game at a late hour, the last ever played at old Rix Stadium on Malvern Avenue. Two years before, Hot Springs claimed the first of two state championships for rookie coach Bobby Hannon, also against Jonesboro at Rix, with future Razorback great Scott Bull at quarterback for the Golden Hurricane.

Hot Springs' first of four state championships in football came in 1934, the second in 1942. Two Razorback players of the 1940s, Alton Baldwin and Eugene "Bud" Canada, the latter a longtime Arkansas state senator (both since deceased), played at Hot Springs. The Trojans' home stadium is named in memory of Joe Reese, defensive coordinator under Hannon in the 1970s and his successor as head coach.

The Trojans made the state playoffs in 2002 as a conference champion under ex-Razorback offensive tackle Alfred Mohammed, defeating Robinson 34-19 and losing to Greenwood (mighty even then) 19-7 in postseason home games.

Hot Springs seeks its first playoff victory in eight years Friday night at Little Rock Mills. The Trojans are 7-3 with the No. 3 seed from 5A-South; the 9-1 Comets are seeded No. 2 from 5A-Central (exit off Interstate 530 on Dixon Road in south Little Rock for Mills High School).

Mills, coached by Cortez Lee, started 8-0 before a 29-28 overtime loss at home to Central champion Robinson. By 28-7 on the road last week, Darrell Burnett's Trojans scored their first win over Lakeside since 2015. The Trojans lost conference games to Little Rock Parkview and Camden Fairview, plus a one-point road game to 4A conference champion Arkadelphia.

In other first-round playoff games involving Garland County schools, Lake Hamilton plays Searcy at home in 6A, Jessieville goes to Melbourne in 3A and Mountain Pine, seeking a third consecutive finals appearance in 8-man football, welcomes Midland (2-4) to Stanley May Field.

The Red Devils won the state 8-man championship in 2020, although the AAA did not sanction the sport for that purpose until last year, when Strong-Huttig defeated Mountain Pine 66-60 in overtime at War Memorial Stadium in Little Rock.

Coached the last two years by Sam Counce, Mountain Pine is unbeaten under first-year coach Daryl Scott. The Red Devils won state championships in 1978 under May and 1979 under Lonnie Sutton, losing a Class B title game to Harding Academy (another traditional state powerhouse).

Tommy Gilleran, in his sixth year at Lake Hamilton, is the last Garland County football coach to win an 11-man state championship, his 2009 Fountain Lake team beating Prescott in the 3A final after losing to Charleston in the '08 title game. Gilleran's 2020 Lake Hamilton team reached the 6A final, losing to Greenwood at WMS after a one-point semifinal win at Sylvan Hills in overtime.

Jessieville coach T.J. Burk quarterbacked the 2006 Lions, then coached by Don Phillips, to the 3A title against Junction City on a bitterly cold December night at WMS. The Lions scored a needed conference victory last week at Two Rivers for the No. 5 seed from 3A-4. Melbourne is the 3A-2 winner.

Elsewhere Friday night, all in 7 p.m. kickoffs, Arkadelphia welcomes Clinton and Malvern is home against Pottsville in 4A, Centerpoint plays Lavaca and Bismarck faces Manila in 3A, and Mount Ida meets Episcopal Collegiate at home in 2A. Conference champion Glen Rose received a first-round bye in 3A.