Yet another Ravine battle goes to OBU 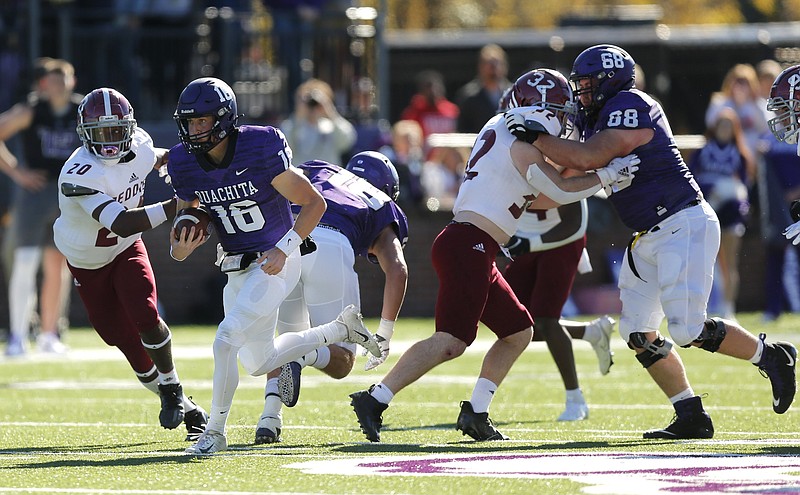 Ouachita Baptist quarterback Grant Allen (16) races past Henderson State defensive back Patrick Jones (20) for a 52-yard touchdown during the first quarter of OBU's 31-28 win in the Battle of the Ravine on Nov. 13, 2021, at Cliff Harris Stadium in Arkadelphia. - Photo by Thomas Metthe of Arkansas Democrat-Gazette

As a Harding University alum, I should be peeved today, railing at the NCAA for not including the Bisons in the Division II football playoffs.

A 9-2 record apparently has dropped in value, according to deeper thinkers in high places. The Bisons were informed Sunday that their 55-10 win Saturday over Arkansas Tech came in their last game of the season.

"The Bisons will not play in a Division II bowl," read the terse three-paragraph release emanating from the sports information department in Searcy.

Ouachita Baptist is the only Great American Conference team advancing, and with an 11-0 record, the Tigers have more combined victories than Arkansas and Arkansas State. Check those postmarks at your own pleasure, but Harding also has more than both Division I-A Football Subdivision teams in the Natural State.

(Arkansas State, 3-7, beat Massachusetts 35-33 Saturday to the amazement of winning coach Butch Jones: "Offensively, I don't think we could play any worse than how we played in the first half." No need for further rehashing of Arkansas' 13-10 loss to LSU, yielding a 5-5 record for the Razorbacks.

Long-suffering Razorback fans, an apt title in too many years since Bobby Petrino went cycle riding with a friend on April Fools' Day 2012, were treated to an 11 a.m. start under cold conditions against LSU. For the final home game against Ole Miss, they'll be expected in their seats at 6:30 p.m. for another television-arranged kickoff, creating an end time of possibly 10 p.m. or after. Does anyone want to pay a two-night minimum at a northwest Arkansas hotel just to watch these guys "run through the A" one last time at Reynolds Razorback Stadium?)

All that is said to say this: The best college game of the year in Arkansas, one of the best ever played in the 95-game series, took place Saturday in Arkadelphia. Just when you think the Battle of the Ravine can't better itself, along comes this classic at Carpenter-Haywood Stadium, home of the HSU Reddies.

As one who watched these teams play as a child, I stand in awe of both once again. Ouachita, the GAC championship already clinched, sustained its bid for a perfect season with a 40-37 overtime victory. With other viewing options available, the 11,000-plus in attendance knew they made the right choice.

Henderson, its six-game losing streak to the Tigers surely heavier than any millstone Arkansas might carry after dropping 16 straight games to Alabama, entered knowing it could do nothing about the conference title. But in a game that deserved to be seen, not one in which records should be thrown out the window -- and when has that ever not been true regarding these schools? -- both teams played like "ESPN GameDay" was in town, everything riding.

Ouachita snuffed out a 34-20 deficit in the last 4:47 of regulation and answered with a touchdown after Henderson kicked a field goal in overtime. Coach Todd Knight, trusting his team, watched All-American running back T.J. Cole convert a fourth-and-one play, which if stopped short would have ended the game, before sending everyone home, fans on the visiting side cheering loudest.

"We never packed it in," Knight said, "and we weren't about to."

"All that hard work (in practice) really paid off in this game," said Cole after a 29-for-114 game rushing with three touchdowns.

Another close one goes to the Tigers, who have beaten the Reddies by three points in each of the last three seasons. Henderson had a chance for the win without going to overtime when Tristan Heaton's 46-yard field goal attempt sailed wide as the buzzer sounded.

Henderson coach Scott Maxfield has been on the winning side -- most notably, I thought, in the overtime classic of 2015 at Cliff Harris Stadium on the opposite side of U.S. Highway 67. That day, it seemed like all Clark County was watching from whatever venue available.

Long may the Battle of the Ravine endure. It has survived world wars, a suspension when the off-field hijinks became extreme, coaching changes and marquee players departing on both sides, a silly period in which the schools were in different conferences, even the conversion of Clark from a dry-to-wet county. Talk about change, alcohol being served in a county with a Baptist-sponsored university!

That school, Ouachita, again is the king of Arkansas small-college football -- as for Harding, losing to both Arkadelphia schools this year, we're number three and trying harder. In a week that alum Sarah Huckabee Sanders was elected governor, it couldn't have ended much better for people wearing purple and gold to the game Saturday. Another OBU alum, good friend Rex Nelson, who called the game, can write about it endlessly knowing he has one devoted reader.

Print Headline: Yet another Ravine battle goes to OBU