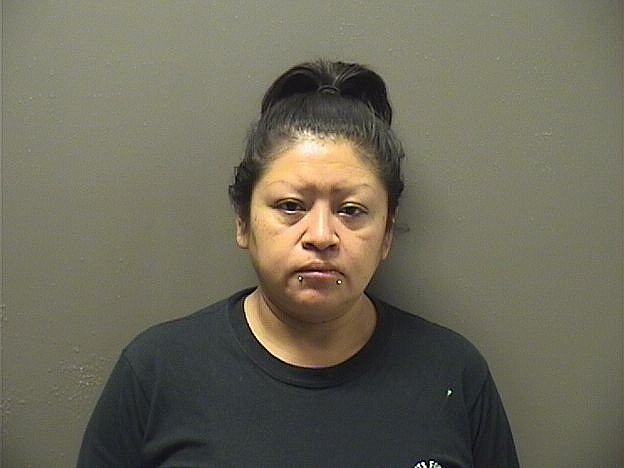 A local woman on probation from a conviction for driving while intoxicated and endangering minors earlier this year was arrested again on the same charges late Sunday.

Ana Martinez Fuentes, 42, who lists an Elkhorn Loop address, was taken into custody around 8:45 p.m. and charged with misdemeanor counts of DWI, second offense, two counts of second-degree endangering the welfare of a minor, speeding and not having a driver's license and was cited for no insurance, no seat belt, failure to maintain control, driving left of center and improper turn signal.

Fuentes was later released on a $3,500 bond and is set to appear on Dec. 5 in Garland County District Court. She was previously convicted on Aug. 17 for DWI, first offense, and two counts of endangering the welfare of minors and sentenced to one year in jail, with all but seven days suspended, one year of probation and ordered to pay $995 in fines and court costs.

According to the probable cause affidavit, shortly after 8:30 p.m. Sunday, Garland County sheriff's Cpl. Matthew Cogburn saw a vehicle traveling at a high rate of speed on Crystal Hill Road, noting it was going 18 mph over the speed limit.

He got behind the vehicle and allegedly saw it cross the centerline four times and the fog line twice. He activated his lights to make a stop near Blacksnake Road and the driver, later identified as Fuentes, signaled she was turning right onto Blacksnake, but then made an abrupt left turn onto a dirt pull-off area.

Cogburn made contact with Fuentes and reportedly noticed a strong odor of intoxicants coming from the vehicle. He asked if she had been drinking and she said, "No, my boyfriend is." He then noticed her eyes were red and watery so he had her step out. As she walked to the back, she allegedly held onto the car for balance.

Asked again if she had been drinking, Fuentes said no, but Cogburn continued to note an odor of intoxicants coming from her. Asked if she would submit to some field sobriety tests, she stated she would and then allegedly stated, "I did drink a 24-ounce big beer earlier."

He conducted the first test which she reportedly failed and then she stated "her stomach was hurting" and she could no longer take any tests. At that point, she was taken into custody on suspicion of DWI.

Cogburn went to talk to her male passenger to see if he could call someone to come get the car and one of the back seat passengers said she could call her brother, but she didn't know if he was awake. At that point, Cogburn realized the two passengers in the back were both juveniles, ages 12 and 14.

Cogburn contacted the Department of Human Services, which came to get the children. Fuentes was transported to the detention center where she consented to a breath test shortly before 10 p.m. which registered her blood-alcohol level at .108%, above the legal limit.

Candidate says she did not agree to advertised debate
by From Staff Reports
Judge Hamilton Singleton: A life in law
by Bradly Gill
14 artisans, three from Camden apply window-saving skills at workshop
by Sean Clancy
AG Alert: Fake charity scams can bring the chill
by Special to the Camden News
Entergy: Deck the Halls safely this year
by Special to the Camden News
ADVERTISEMENT