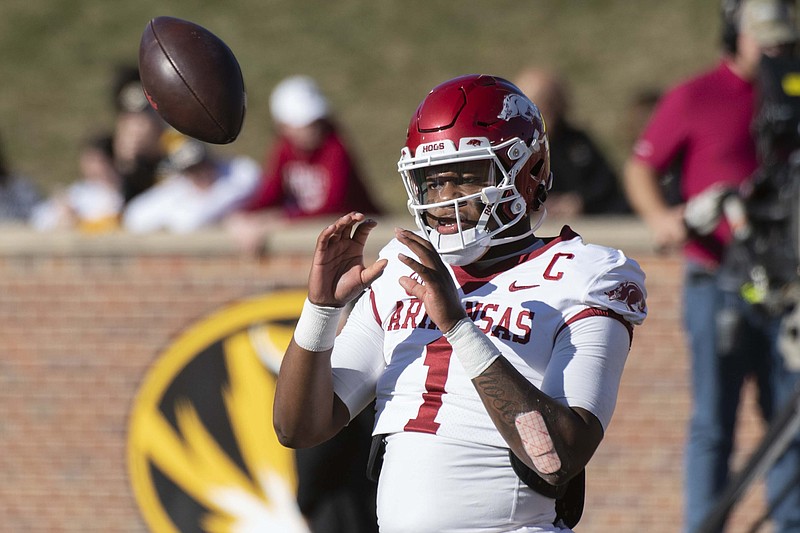 Arkansas quarterback KJ Jefferson warms up before the start of a game against Missouri in Columbia, Mo. - Photo by L.G. Patterson of The Associated Press

Razorback Nation can't say it wasn't warned about what has become another faceless 6-6 football team.

Not much different than Missouri, its opponent Friday at Faurot Field, honoring the former UM coach who in 1957 gave Frank Broyles his first job as head coach.

Missouri produces world-class journalists -- I worked for one and edited others -- and they can pick this one apart until both Arkansas and Missouri play in bowl games.

Whether "our great fans," as Eddie Sutton liked to call Razorback Nation, will travel far to watch this team, which lost three out of four games in November, remains to be seen. Some of them have endured trips to Auburn, Alabama, and Provo, Utah, meanwhile shivering in Fayetteville on the night that the Razorbacks scrambled past Ole Miss with the flair of Houdini.

If the Ole Miss game is how these Razorbacks are to be remembered, for winning on a night that the losing team made more than 700 yards, call it one hollow season for the guys in red. Sam Pittman is in no danger of losing his job, but the third-year head coach's honeymoon period has expired. These Razorbacks collapsed in November like one of Bret Bielema's or Chad Morris' -- at least the 2022 teams won three conference games -- and without satisfactory answers forthcoming.

Missouri fans didn't care enough to sell out their home stadium on Thanksgiving Friday for this regional rivalry between teams that, it can be maintained, belong in another conference, say the Big 12.

On its face, this was one of the least anticipated games on the final SEC weekend, ranking up there with Kentucky vs. Louisville and paling, if you ask me, to Tennessee vs. Vanderbilt, the latter another school turning out learned composers of the press. It doesn't compare with Alabama vs. Auburn or Mississippi State vs. Ole Miss; South Carolina vs. Clemson stirs more passion.

This marked the 20th anniversary of the Miracle on Markham -- the pass from Jones to Birmingham that sent a Houston Nutt-coached team to Atlanta. Arkansas 21, LSU 20 at War Memorial Stadium, one of two Razorback wins over Nick Saban-led teams (joining the 2000 game at the Little Rock site).

They still play for the Golden Boot, but the Arkansas-LSU series has lost something, I think, since it was moved up in the regular season following the 2014 entrance of Missouri and Texas A&M to the SEC. Arkansas' series with A&M, the Southwest Classic at Arlington, Texas, now sparks about as much kinetic energy as Arkansas vs. Missouri. We may see a day when the former is played on campus sites, no matter if grizzled veterans think Arkansas needs a strong recruiting presence in Texas that the Classic can provide.

The Missouri game stirs up people in northwest Arkansas, one reason that Lou Holtz' desire to shake loose from the Southwest Conference in the late 1970s found support. If Arkansas is not Missouri's foremost SEC rival, then the Tigers don't have one. A big game with Missouri more readily stirs memories of basketball games with Kansas, those border rivals playing a football game of national significance as late as 2007.

Pittman, coming home after coaching the offensive line first at Arkansas under Bielema and later at Georgia under Kirby Smart, accepted a job offer from UA that made other prospects think twice. Lane Kiffin's name was prominently mentioned, only to have agent Jimmy Sexton work out a deal for Kiffin at Ole Miss. (Kiffin, after a November in Oxford as rough as that Pittman endured in Fayetteville, now says that he has cooled on the Auburn job, which may go to ex-Rebel coach Hugh Freeze, his profile enhanced by a November road win over Arkansas.)

Eli Drinkwitz, with some in-state ties, had his name come up for the UA job before he left Appalachian State for Missouri. Roger Wehrli doesn't play for the Tigers any longer -- neither does Hot Springs alum Wallace Snowden, another good one who escaped Holtz' recruiting net and who was around for the last days in Columbia of coach Warren Powers -- and if it wasn't Gary Pinkel, the next Dan Devine as head coach is not likely to walk through the UM athletic director's door.

But the Tigers can beat Arkansas in football -- six of the last seven years for a 10-4 series lead in the Battle Line Rivalry. I can imagine UM alum Norm Stewart, the former Mizzou basketball coach, throwing a pack of gum to Arkansas fans and saying, "Here, people, chew on this."