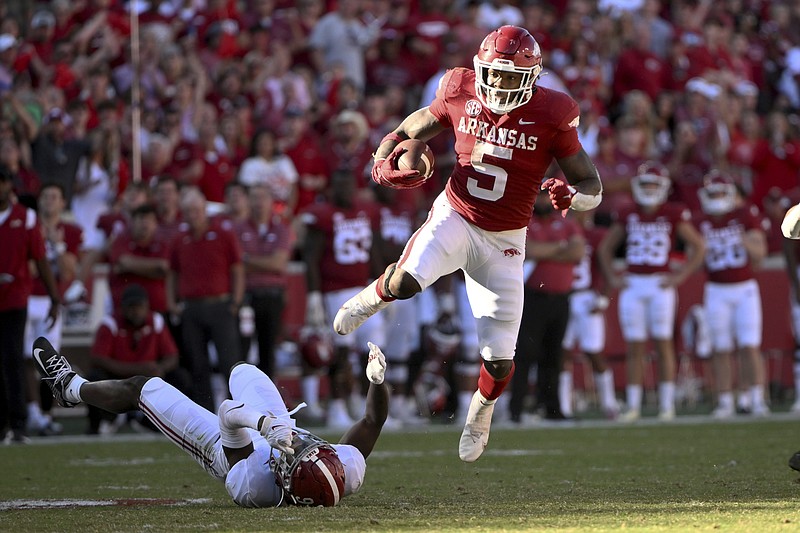 Arkansas running back Raheim Sanders (5) slips past Alabama defensive back Jordan Battle (9) Oct. 1 in Fayetteville. - Photo by Michael Woods of The Associated Press

Take it from someone who's been there: Starkville, Mississippi, gets a bad rap.

True, it has no more oceanfront property than in 1998, when I took in an Arkansas-Mississippi State football game. But unlike Gertrude Stein said of Oakland, California, I found a there there.

And while it may be a road less traveled for a Southeastern Conference football fan, it's as much a campus town as Fayetteville or Lexington, where tonight at Kroger Field the Kentucky Wildcats play South Carolina after a fall afternoon of racing at Keeneland.

Starkville and Fayetteville once required extensive travel. One could go through Memphis, cutting through north Mississippi before turning south at Tupelo, Elvis Presley's hometown, or take U.S. Highway 82 east from Lake Village through Greenville and Greenwood. Tourists are thankful that the old Mississippi River bridge west of Greenville has been demolished and a new one stands tall.

You can get a decent meal in Starkville, I guess, although I know of no local landmark like Herman's (Fayetteville) or Dreamland (Tuscaloosa). My only food stop there came in the press box at old Scott Field (Davis-Wade Stadium) before the aforementioned '98 Arkansas-MSU game.

A family member through marriage who lives in the Mississippi Delta prepared me for what to expect in Starkville. "They'll give you the shirt off their back," he said, "but ask if they can press it first." (He asks me how Arkansas draws enough athletes to Fayetteville, exactly the point I've made about MSU and Starkville. If there is an Ole Miss-like Grove on the MSU campus, it went undetected.)

He was right that the home people could be exceedingly pleasant. One such man greeted me in the pressbox and asked where I was from. "Hot Springs," I said, "Bill Clinton's hometown." This was in 1998, remember, the year of Monica Lewinsky. The other man looked at me kindly, put his hand on my shoulder, if I recall, and responded, "Bless your heart." (The state that once sent John Stennis and Theodore Bilbo to the U.S. Senate now finds folks wearing "Make America Great Again" caps.)

We sat in an open-air pressbox of an open-ended stadium. Whether or not SEC rules permit, the home team fans ring cowbells incessantly, a side effect of playing in Starkville that opponents must account for.

In the first meeting between coaches Houston Nutt and Jackie Sherrill, Mississippi State took a 22-21 victory, pinning Arkansas with a second loss a week after falling 28-24 at Tennessee. Wayne Madkin guided the Bulldogs to a game-ending field goal, kicked by Brian Hazelwood, that an SEC officiating crew charitably called good, just inside the posts.

Not an easy game for an Arkansas-based sports writer to report but one dutifully filed before returning to the Delta. The trip was sweetened by the calls of Alabama broadcasters Eli Gold and Ken "Snake" Stabler in that year's Iron Bowl vs. Auburn. (Good wishes to Gold on a health-related leave of absence; Snake checked out in 2015, age 69.)

Meeting at 11 a.m. today in Starkville, Mississippi State is 4-1 after smoking Texas A&M, which beat Arkansas the previous week. Arkansas is 3-2 after its streak against Alabama reached L16 in a 49-26 smacking in Fayetteville.

The betting line, MSU minus 9.5, reflects whether Arkansas quarterback KJ Jefferson can play or how effectively. Quarterback Will Rogers can harass Arkansas' defense in the manner of Alabama's Bryce Young.

If you're attending the game, brace for the cowbells and arrive early to sample true Southern hospitality.