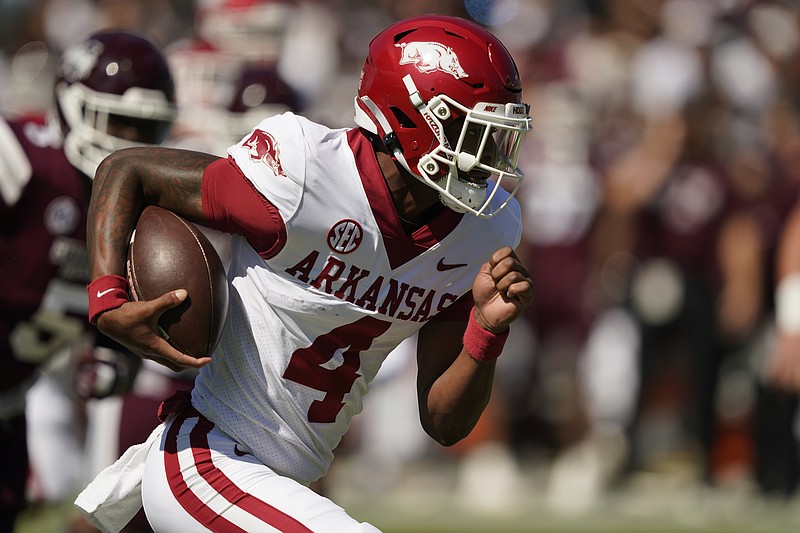 Arkansas quarterback Malik Hornsby (4) runs the ball for a first down against Mississippi State Saturday in Starkville, Miss. - Photo by Rogelio V. Solis of The Associated Press

Razorback football fans may be asking the wrong question about a team once ranked in the top 10 nationally but now taking on water like a sinking ocean liner.

"When will KJ be back?" echoed wherever they reviewed Arkansas' game against Mississippi State, for which quarterback Jefferson received a DNP (did not play) notice.

The two-year starter was withdrawn because of an apparent head injury for a game he had circled on his calendar. The Mississippi native (North Panola High) would have gleaned more from playing on enemy turf than most Razorbacks.

Dinged up after taking a sack against Alabama, Jefferson did not practice last week until Wednesday. Razorback coaches, one reads, knew early that he would not play, though he made the trip. Might not have mattered -- State quarterback Will Rogers, one of the league's best, passed for nearly 400 yards and three touchdowns.

With three straight losses for Arkansas, those pie-in-the-sky predictions of 10 or more wins have been scaled back if not laughed off. They peer upward from the Western Division basement at 3-3 overall and 1-3 in the SEC. As said here in August, all bets are off if Jefferson is out long.

A crisis week for coach Sam Pittman led to a 40-17 thumping by Mississippi State, which had lost home and away to Sam's previous Razorback teams. The odds would have been steep had Jefferson played, becoming monumental when raw backups (Cade Fortin and Malik Hornsby) were entrusted with the UA offense.

One question worth pondering for Razorback fans has rarely been posed to a Pittman-coached team. Namely, how can one so non-competitive against Mississippi State be trusted against any remaining opponent?

This is said in deference to opposing coach Mike Leach, whose troops graded out highly. No doubt aware of Jefferson's doubtful status but mindful that Rogers might light up the Hogs, Leach, it was thought here, might turn up the jets on his Air Raid offense. Then again, discretion is sometimes the better part of valor, even with college coaches wedded to the pass.

A more balanced Bulldog team confronted Arkansas than in 2020, when the Hogs snapped a 20-game SEC losing streak at Starkville, Pittman's first as a head coach. The home team ran six times in its first nine plays, setting the tone for a 173-yard afternoon rushing with three touchdowns while Rogers passed for 395 yards and three more scores.

(That said, thumbs down to Leach, channeling his inner Jackie Sherrill, with a deep ball -- though to the sideline, not the end zone -- for the last of Rogers' 31 completions, the fourth-quarter clock ticking.)

Arkansas came at State with a redshirt senior (Fortin) pressed into duty when Jefferson went down against Alabama and redshirt sophomore (Hornsby), who with 114 yards rushing and 234 yards passing was the Hogs' player of the game by any standard.

This begs the question why Hornsby had no completions or attempts in Arkansas' first three games. This from a player who worked extensively at receiver in the offseason -- Arkansas trying to replace Treylon Burks -- but was returned to quarterback before the first game. Rumors surfaced after the Alabama game, though not to my knowledge confirmed in print, that Hornsby had left the team.

Any SEC team should possess a second-team quarterback with game experience at the ready. Hornsby had some moments last year -- especially against Texas A&M with Jefferson out while clearing his head -- and his 8-of-17 game Saturday, though with two picks, was encouraging.

Now if the coaches will study the game film and coach up Hornsby, at least until Jefferson gets an all-clear signal, and quit playing a shell game with the press.

Some problems for Arkansas may be resolved only through the transfer portal or by general recruiting. The Hogs need difference makers, game changers, against the best SEC teams. They can only go so far with overachievers, no matter the savvy of linebackers Bumper Pool and Drew Sanders.

"We try harder" might work for a high school team but doesn't go far in a conference that gobbles up teams found wanting. Arkansas is short at too many positions and with three straight losses risks becoming a second-tier SEC team, if not one already.