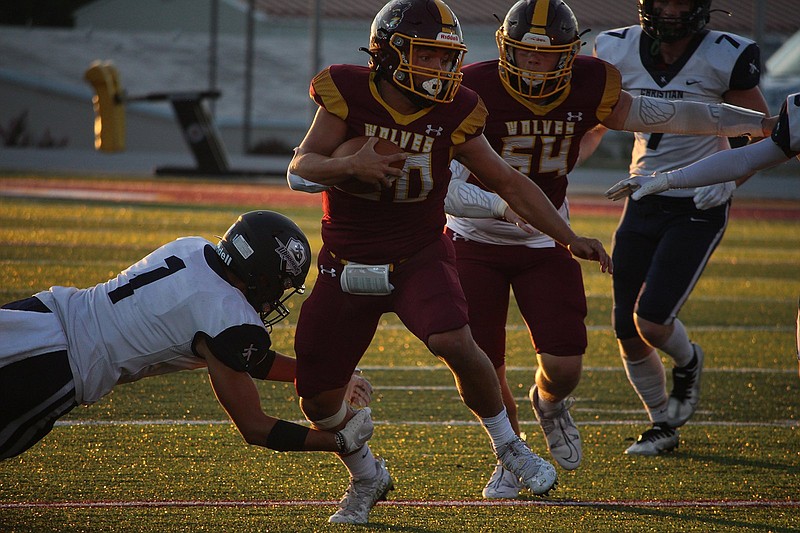 Lake Hamilton's annual football game against Lakeside is important for bragging rights and a good financial payday for the home team.

In statewide prestige, it doesn't stack up with Lake Hamilton vs. Greenwood. Those conference rivals, heretofore yoked in November and once in a December championship game, adorn today's Week 7 schedule in Arkansas high schools. It's included among the state's top games this week by the Arkansas Democrat-Gazette whose Northwest edition writer Henry Apple, a former Hot Springs co-worker, votes in the panel.

That newspaper predicted a Greenwood sweep and not, I suspect, merely because the game is in Sebastian County. Lake Hamilton is 7-0 to Greenwood's 5-1 and the Wolves are 5-0 in 6A-West to the Bulldogs' 4-0, but one big number is in the home team's favor. While accounting for the roster turnovers over the years, Greenwood's seven straight victories over Lake Hamilton must be taken into consideration.

The Bulldogs have won five straight this year after opening in a 41-27 road defeat to Stillwater, Oklahoma. They have been unstoppable since a 56-53 nail-biter against Class 7A neighbor Fort Smith Northside in Week 2, averaging more than 50 points against conference rivals Mountain Home, Siloam Springs, Van Buren and Greenbrier.

Not every 6A-West team compares with Greenwood, Lake Hamilton or Little Rock Christian. One local man called a Lake Hamilton September opponent "maybe the worst team I've ever seen." That is not likely to be heard again this season, certainly not tonight or in three weeks when the Wolves visit Pulaski Academy (6-0, 4-0), defending Class 5A champions and along with Bryant one of the state's diamond stick pins in prep football.

Lake Hamilton's high ranking in the state polls stems from a combination of talent, tradition, coaching and 34-19 home victory over Christian in Week 3, its conference opener. Greenbrier, where college buddy and former Harding University coach Randy Tribble is in charge, is a common opponent; the Wolves took care of a new 6A-West member 33-14 at home, after the Bulldogs traveled for a 49-21 conquest.

Chris Young has kept the Greenwood tradition going after the 2018 retirement of another Harding pal, Rick Jones. The school has become something of a feeder for the University of Arkansas while Lake Hamilton's UA connection has dried up since Grant Garrett and Matt Wait played. Greenwood, hometown of Lake Hamilton icon and former coach Jerry Clay, once beat the Wolves in the playoffs.

Greenwood, whether anyone on the Wolf Street campus says so, has become the marquee opponent on Lake Hamilton's schedule. Since becoming regular-season conference rivals in 2016, the Bulldogs have won three games each in the series home and away and 48-24 for the 2020 6A championship at Little Rock's War Memorial Stadium.

Last year's 35-0 game was especially grim, Tommy Gilleran saying later his losing team was not competitive on the road a week after a one-point home loss to Benton.

Gilleran, a Lake Hamilton alum, probably knows Greenwood as well as the name of his wife. With a win tonight, the Wolves would be recognized as one of Arkansas' best -- and not just in Class 6A. Greenwood is a measuring stick for a number of teams, just as Lake Hamilton has proved in Garland County.