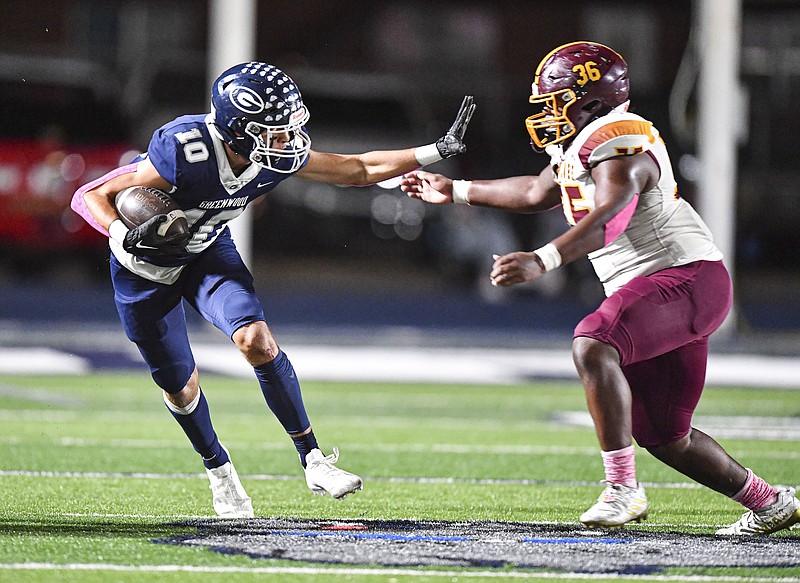 What applies to one Garland County school in positive light rings true for the same in a not-so-flattering way.

The subject was football rivalries, for which the local books can be revised. In short, Lake Hamilton has a problem with Greenwood like Lakeside has with Lake Hamilton.

In a battle of unbeaten teams that attracted statewide press, not for the first time with these schools, Greenwood improved its winning streak over Lake Hamilton to eight games. If you're keeping score at home, that's half as many consecutive wins for Greenwood in that series as Alabama enjoys over Arkansas. And when's the last time (if ever) that Southeastern Conference series was considered a rivalry?

Since they became conference rivals in 2016, Greenwood has won four at home and three at Lake Hamilton plus a 2020 rematch in the Class 6A championship game at Little Rock's War Memorial Stadium.

Moreover, the Wolves have not scored on the Bulldogs since that 49-24 December 2020 matchup. Their last two matchups have been in Sebastian County, 35-0 last year and 24-0 Friday night.

The score flashed on one's TV screen last week about the time that a reporter from Little Rock's KLRT (Channel 16) filed a live report on the station's 9:30 p.m. (early) scoreboard show. With the stands emptied from a game set for a 7 p.m. kickoff, one guessed the teams had been off the field for some time.

Greenwood improved to 6-1, 5-0 in 6A-West. State runner-up to El Dorado last year, the Bulldogs have conference tests remaining with Little Rock Christian and defending Class 5A champion Pulaski Academy. Except for a first-game loss out of state and a 56-53 squeaker against neighboring Class 7A rival Fort Smith Northside, coach Chris Young's team has looked like one that a Garland County man said weeks ago "can order the championship rings now."

One positive note for Lake Hamilton: The Wolves held Greenwood below its 50-point average.

For any number of reasons, Lake Hamilton can benefit from the coming bye week more than most winning teams. Sure to be touched on practice is tackling, which if the film reports from Greenwood can be trusted betrayed Tommy Gilleran's team, which rated high defensively in an early-season home game against Christian. Lake Hamilton must be at maximum alert in all phases when it plays at Pulaski Academy in two weeks, ex-Razorback Anthony Lucas keeping past coach Kevin Kelley's Spread offense with no punts and onside kicks.

Equally alarming to this watcher was Greenwood's apparent edge in team speed. The Bulldogs kept breaking tackles, once beating a Wolf running back to the boundary with four defenders giving chase.

This was a year that Lake Hamilton could have used a game with Hot Springs, which has its best team in years and throws the football a lot. Instead, Lakeside fell to Lake Hamilton again (L5 against the Rams in that series). Lake Hamilton took care of Class 7A Jonesboro (the Golden Hurricane's main sport is basketball).

Gilleran, the last Garland County coach to win a state football title (Fountain Lake, 2009 Class 3A), exudes optimism but is mindful that his team has work to do before November. Though winning at a slower pace than Greenwood and Pulaski Academy, they usually win. They are likely to be playing when some local teams have stored away their equipment.