Racing lasts despite itself sometimes 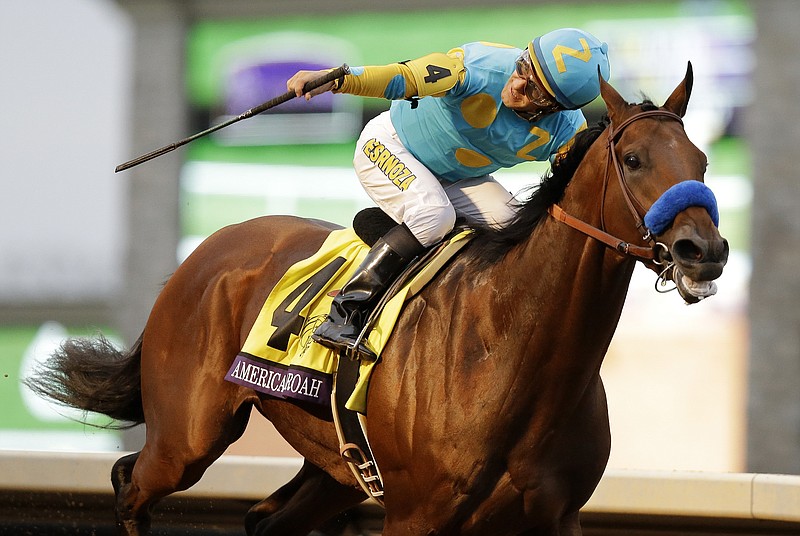 If it were as poorly marketed as horse racing, the Women's National Basketball Association surely would cease to exist.

Instead, backed by the established WNBA since 1996, the women's league thrives, even if only die-hards know the mascots by heart and those with too much time on their hands can name all its past champions.

Horse racing, long known as the sport of kings, reigns over a dynasty both vast and shrinking. Among its problems is an aging fan base with the 18-34 group, most highly coveted by advertisers, turning to faster-paced sports. Too much time between races and too many races to monitor are frequent complaints.

Cella's son Louis now oversees that empire, which now races live from December to May and offers everything for the casual fan except on-site turf racing. That might be the only way to get turf master Chad Brown back to Oaklawn in that his only full season here left him seeking safer ports. Having no turf course rules out Hot Springs hosting the Breeders' Cup World Championships, but could the city's infrastructure handle such an undertaking?

The Breeders' Cup, a two-day gathering of the stars that Charles Cella craved, burst upon the scene in 1984 with Wild Again, ridden by perennial Oaklawn champion Pat Day (belated happy 69th birthday) winning the series' first Classic. The $6 million race lacks the history, not to mention majesty, of the Kentucky Derby, a rite of spring since 1875 at Louisville's Churchill Downs. There, in 2010, mighty Zenyatta suffered her only defeat in 20 races when Blame held off Big Mama in the Classic under the late Garrett Gomez.

Though it went off in football season at a time and in a state with basketball fever, that was a racing crowd under the iconic Twin Spires. Five years later, Keeneland (down Interstate 64 in Lexington), played BC host for the first time. That Classic saw American Pharoah, the sport's first Triple Crown winner in 37 years, retire as Horse of the Year after beating older horses in the Classic.

Keeneland played host again in 2020, when Louisville native Brad Cox won with four of the horses he saddled. The COVID-19 pandemic prompted switching the Lexington track's fabled Spring meeting to five days in July, though the BC adhered to regular dates. Authentic, winner of the first September Derby, won the Classic, a second Horse of the Year in three seasons for trainer Bob Baffert, who in time would fall out of favor at Churchill Downs.

The 27th Breeders' Cup is Nov. 4 and 5 with five juvenile (2-year-old) races on Friday and nine, including the Classic, on Saturday. Take it from someone who's been there, Keeneland in the fall is unlike anything one can imagine. That feeling persists from time the traveler arrives at Blue Grass Airport and crosses Man o' War Boulevard (went end of Versailles Road -- pronounced, if you must know, like comedian Soupy Sales) on U.S. Highway 60 to the track.

One jockey, not having seen the French racing center, said Keeneland represented his conception of Longchamps, where turfers contest the Prix L'Arc de' Triomphe in the fall. One tourist said "the US could learn a lot about how to run a large event like this from the French."

The American press could take notes from the Europeans on how to promote the sport. The upcoming Breeders' Cup Classic is headed by the unbeaten 4-year-old Flightline, who may be the shortest-priced favorite in race history. His Pacific Classic win at Del Mar, making him 5 for 5, earned comparisons with Secretariat's 1973 Belmont Stakes.

Horse of the Year is between Flightline, trained by John Sadler, and presumptive 3-year-old champion Epicenter, from the mighty Steve Asmussen barn. Rich Strike, 80-1 winner of the last Kentucky Derby, also is entered in the Classic at the classic American distance of a mile and a quarter, and the other races include two-time Oaklawn Grade 1 winner Letruska and super sprinter Jackie's Warrior, a local Grade 3 winner in April.

if the announcers aren't too busy telling how to complete an exacta, they might give you the full fields. Never overestimate the American press, which if given a choice would rather report on whether Tom Brady is speaking to his offensive linemen or not.