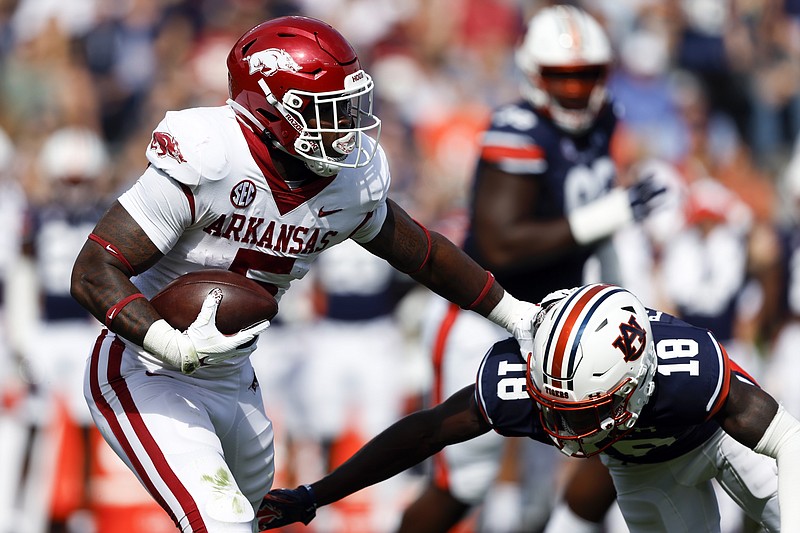 Arkansas running back Raheim Sanders (5) stiff arms Auburn cornerback Nehemiah Pritchett (18) as he carries the ball during the first half Saturday in Auburn, Ala. - Photo by Butch Dill of The Associated Press

Auburn's football game with Arkansas wasn't the only story developing Saturday on what the folks in Lee County, Alabama, call the Loveliest Village on the Plains.

Southeastern Conference politics dominated the discussion wherever they weren't mulling over whether Auburn could extend its winning streak in the series to seven games. ESPN broke the story that Mississippi State athletic director John Cohen is in line to become the next AD at Auburn.

That and Auburn's 41-27 loss at Jordan-Hare Stadium ramped up the heat on second-year Tiger coach Bryan Harsin, who with a 9-12 record at the school may need an Iron Bowl win over Alabama if he hasn't worn out his welcome.

If he takes the Auburn job, Cohen's first duties will be deciding the fate of Harsin, who replaced a fired Gus Malzahn, both former Arkansas State head coaches, the latter replacing a fired Gene Chizik.

For a school with a national championship in this century (2010 under Chizik, reaching the 2013 finals in Malzahn's first year) and that beats Alabama more often than certain SEC schools (Arkansas, for one), Auburn is consistent about firing football coaches. Bruce Pearl's basketball team now provides a remedy for football hangovers, no matter what buyout money a Malzahn or a Chizik receives. Nolan Richardson's Arkansas hoop teams once provided the same service when the Razorback football program lost its way -- Nolan, winning a national title and playing for another, got paid off in the end, though we'll spare you the details.

Arkansas has become that rare school with an adoring fan base for both coaches of money sports. Razorback fans are wild over Eric Musselman's basketball team, which insiders will tell you should make the NCAA Final Four after back-to-back Elite Eight runs. Sam Pittman, slowly getting his three-year record over .500, won over the fans when they deduced quickly that the foolishness of the last decade of Razorback football was over.

Winning out including a bowl, these Hogs could reach 10 victories. A decision at home Saturday over Liberty, whose Hugh Freeze beat Alabama twice and defeated Arkansas at War Memorial Stadium when coaching Ole Miss, would make Pittman's squad bowl eligible with six wins. That's after going 9-4 and beating Penn State in the Outback Bowl last year. Pittman's first team did enough, going 3-7 in the pandemic season of 2020, to sway public opinion in his favor.

Just don't be deluded into thinking this is a top-10 team or an elite program. Such cannot be said of one, like Arkansas, that has no conference titles since 1989 in the defunct Southwest and that has never come close to the College Football Playoffs and only once played (2010 against Ohio State in the Sugar) in the old Bowl Championship Series.

That is more likely in basketball, where a coach with Musselman's drive attracts All-American recruits from all over, even if for only one year. So loaded is Musselman's fourth Razorback team that someone who watches the daily practices told me a grand jury should be convened if it doesn't make the Final Four. North Carolina, Gonzaga, Kentucky, Duke and others -- the usual suspects, plus Cinderellas yet to be identified -- will have much to say about that, of course.

Basketball is improving in the SEC -- coaches such as Musselman, Pearl, Rick Barnes at Tennessee and, of course, John Calipari at Kentucky are largely responsible. But football still drives the train, the SEC having produced the national champion three straight years and with Georgia No. 1 in the polls, Tennessee and Alabama in pursuit.

But a winning Arkansas program might only be sustainable within limits. With major feeder programs like Little Rock Central in decline and 8-man football becoming the rage at schools that have fought a losing numbers game for decades, how can Arkansas preps turn out enough difference-makers every year to keep the Hogs at a high national level? And, referencing a major problem for the 2022 Razorbacks, will they ever be deep enough in talent to overcome inevitable injuries to key men?

Arkansas beat Auburn after a bye week and with veteran quarterback KJ Jefferson having a big day, two factors contributing to the Hogs going off a slight betting favorite. Of the four games left, Missouri is the only one Arkansas can really feel confident about winning and it's in Columbia, where the Hogs have had problems. The first three -- Liberty, LSU and Ole Miss -- are in Fayetteville with the Hogs possibly favored in all after not playing on campus since Oct. 1 against Alabama.

Arkansas finished October two games over .500, like it began the month. Eight victories, the preseason guess in this corner, is reachable. Nine or more look iffy. As in most seasons when Arkansas plays in the SEC West, a gated community within college football.