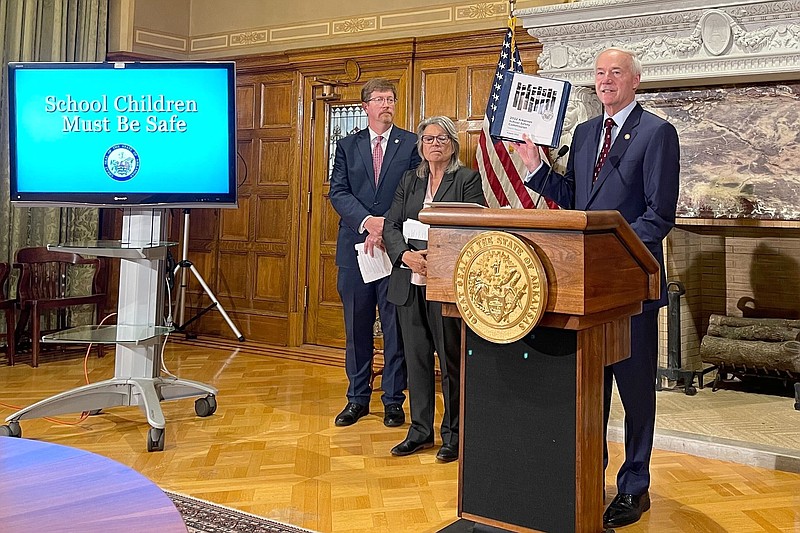 FILE - Arkansas Gov. Asa Hutchinson holds up an interim report from a commission formed to review school safety measures at a news conference Tuesday, Aug. 2, 2022, at the state Capitol in Little Rock. In the aftermath of the school shooting in Uvalde, Texas, governors around the country vowed to take steps to ensure their students would be kept safe. Months later, as students return to classrooms, money has begun to flow for school security upgrades, training and other new efforts to make classrooms safer. (AP Photo/Andrew DeMillo, File)

The creation of a statewide anonymous tip line to report potential threats to school safety was among several new recommendations finalized Tuesday by the Arkansas School Safety Commission.

The commission unanimously approved multiple recommendations from its five subcommittees: mental health and prevention; law enforcement and security; audits, emergency operations plans and drills; physical security; and intelligence and communication. The recommendations include:

• Having the Arkansas Center for School Safety coordinate and plan the creation of a statewide school safety anonymous tip line.

• Adding physical security items to the existing Division of Public School Academic Facilities and Transportation's Maintenance and Operations facility inspection checklist. If deficiencies are found, the district has 30 days to correct any issues.

• Anyone -- including students, teachers and school board members -- who uses school devices will be required to participate in annual cyber security training and go over monthly cyber security reminders regarding potential threats.

• Creating dedicated funding to allow for every county to have a local, full-time emergency manager in place who will work alongside schools to develop school safety plans and assist with training.

• Developing plans between school districts that have a commissioned school security officers program and the city or county that has jurisdiction over the district to establish a joint response to an active shooter situation.

Additional recommendations are expected to be addressed in future meetings.

Republican Gov. Asa Hutchinson reinstated the School Safety Commission in June in the aftermath of several mass shootings across the nation and has said he hopes school districts will use the updated recommendations when making requests for funding. Legislators approved a $50 million grant program during a special session in August that will be used to address recommendations made by the safety commission.

Establishing an anonymous tip line has been among the top priorities of the commission since its reinstatement, and Tuesday's approval of the motion is the first step toward establishing a statewide network.

The tip line would allow students, parents and community members to report any potential threats toward school safety, as well as provide support for students, according to Lori Poston, vice president of clinical services for the Northeast Region for Arisa Health and head of the mental health subcommittee.

"Students can also use the tip line to report bullying, harassment, self-harm and more," Poston said. "It won't serve as a replacement for school counselors, but it will serve as a safety net for students."

"This allows us to leverage some resources, and this fits nicely within our goal," May said.

Chris Chapmond, chief of the Hot Springs Police Department and head of the communications subcommittee, said the cyber security recommendation is also a needed step even though it doesn't have anything to do with potential active shooters.

May agreed, saying sometimes it's difficult to see how cyber security fits into the framework of school security.

"One of the things to remember when it comes to cyber security is the most frequent attack is ransomware," May said. "It can be devastating for a school if it's a double-edged ransomware attack, because schools have personal identifiable information about students, teachers and parents because there is a lot of paperwork that is done. This information can be very vulnerable."

An Education Week article published earlier this year stated that in January, roughly 5,000 schools and colleges had their websites taken down when a ransomware attack targeted a private company that provides web hosting and other communications services.

May said personal data stolen during a cyber attack can be used to bully a student, make young people a target for human trafficking, or can be sold to pedophiles on the internet.

"Schools are targeted primarily because of the juicy personal information they have, but also they are seen as having a lot of money," she said.

Education Week reported in 2021 that hackers demanded $40 million from Florida's Broward County School District before later lowering their price to $10 million. After the district offered to pay a smaller sum, the hackers published nearly 26,000 stolen files.

Chapmond said there were at least three cyber attacks in Arkansas last year that affected more than 9,000 children.

"It can devastate a school's fiscal ability to protect our children," Chapmond said.

May said many of the commission's recommendations involve using digital security measures, such as automatic locking doors and surveillance cameras, that also can be vulnerable if a school experiences a cyber attack.

"If the network is compromised, then these digital and electronic systems can also be compromised," May said. "There is sufficient evidence that shows cyber security should be part of the conversation."

May also noted that children today are more cyber and digitally aware, which means the threat might not always come from the outside.

"It's just not external," she said. "It can be internal, and that might mean a mistaken click or a student nefariously trying to do something to the system."

"Communication is paramount and critical," he said. "This also avoids the potential for friendly fire."

The state's original school safety commission, created in March 2018, submitted 30 recommendations in its 124-page report. Some schools have implemented portions of the original recommendations, but schools are not mandated to follow the recommendations.

Hutchinson reinstated the commission June 10 in the aftermath of several mass shootings across the nation. Under the governor's executive order, the current commission is charged with reviewing the previous commission's report and providing an update on the status of school safety across Arkansas.