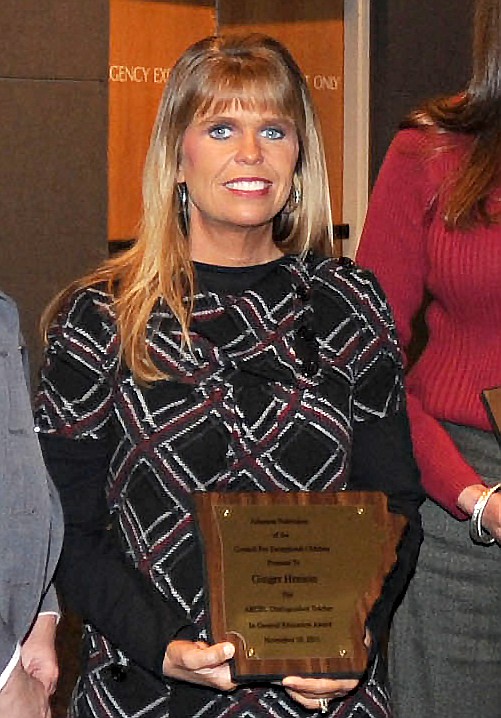 Ginger Henson is shown with an award she received at the Council for Exceptional Children Conference at the Hot Springs Convention Center on Nov. 10, 2011. - File photo by The Sentinel-Record

FOUNTAIN LAKE -- As the Fountain Lake School District continues to mourn the untimely death of longtime educator Ginger Henson, her impact and the legacy she leaves behind is helping them cope with the difficult loss.

Henson, 48, died on Sept. 10 following a short, but devastating, bout with cancer. She was surrounded by loved ones.

The director of education at Fountain Lake, Steve Campbell, said Monday that the students and staff were taken aback by the suddenness of the loss and that additional counselors were brought in.

"Last week was difficult," he said.

"We were able to make arrangements and most of the teachers in the middle school who taught with Ms. Henson were able to be there to honor her last week. And a big part of that was the connection to family.

"Ms. Henson was highly connected with her fellow workers and knew all about their families, and did things with and for their families. And we all knew about Ms. Henson's family and what they were doing," he said.

Born in Blytheville, Henson later moved to Hot Springs and graduated from Lakeside High School, where she met her husband, Chris, before going on to college at Henderson State University in Arkadelphia. She was one of the first teachers hired when the district restructured and built the middle school around 2009. Teaching English and social studies initially, Campbell said it was when the district converted to a charter school that she really found her niche.

"She taught a Google 101 class, and so kids had to come in to their project class with her and work in Google and just look at the extensions and find things that can be done in Google. And then we found that the classroom teachers were going to the kids to find out about the extensions that the kids had discovered. Every time you'd walk by, there would be a new thing that the kids had found. And so that really was an awesome class that she taught," he said.

She later served as a Title 1 teacher and worked with students in enrichment and remediation, helping them find those skills they really needed to work on. In the last couple of years, she was district testing coordinator.

"She was highly organized, very effective and worked with all the buildings," he said. "And so that was the role she was in but she still even then taught one English class over in the middle school. She had a huge impact all over the campus as the years rolled on."

Campbell said probably the greatest legacy people will see from her life will come through her three children: Katie, the oldest, followed by Kristen and Kevin. Katie teaches in the Hot Springs School District while Kristen is currently finishing up her education degree. Kevin, also, is in college.

"I really will be surprised if he's not a teacher/coach. He has a state championship bowling ring from the Unified Special Olympics Bowling Team that he kind of helped coach in his last year at Lakeside as a student. And so I see that as the greatest legacy. And then I visited with a number of our former students during the services last week and, you know, that commitment to come back and see and pay respect to their former teacher was just moving," he said.

"She had this great smile that just welcomed you in and students felt that. And, honestly, her co-workers felt that as well. She inspired our students to be kind and to be better human beings. She was big on Disney, and so that 'dare to dream' type thing -- 'If you can dream it, you can do it' -- all of Walt's sayings, really bore out in her life and in her example to our students and staff."

As one who loved to travel and create memories with her family, Henson later fulfilled her lifelong dream of opening "Henson's Dare to Dream Vacations," as she wanted to help other families have that same experience.

"Every day we bring about 1,500 people onto this campus," he said. "We're about the size of a small town. So, you know, good things happen; bad things happen. We have great days; we have difficult days. As I said earlier, that smile, that attitude of being positive and embracing the lives of your fellow man, is probably what I would say is the greatest thing any of us can do.

"Ginger Henson, obviously, exemplified that. You know, we had two staff members last week lose parents. We had three students last week lose grandparents. And so we embraced those people as well in their time of need and that's an example that Ginger would have set for all of us had she been here," Campbell said.

"We will miss her and we continue to hold up her family and honor them and thank them for sharing her with us for as long as they did. Because it was a gift to have Ginger here as part of our team, part of our family."

Ginger Henson, center, is shown at the 2012 Hot Springs Heart Ball at the Hot Springs Convention Center on Feb. 4, 2012. - File photo by The Sentinel-Record