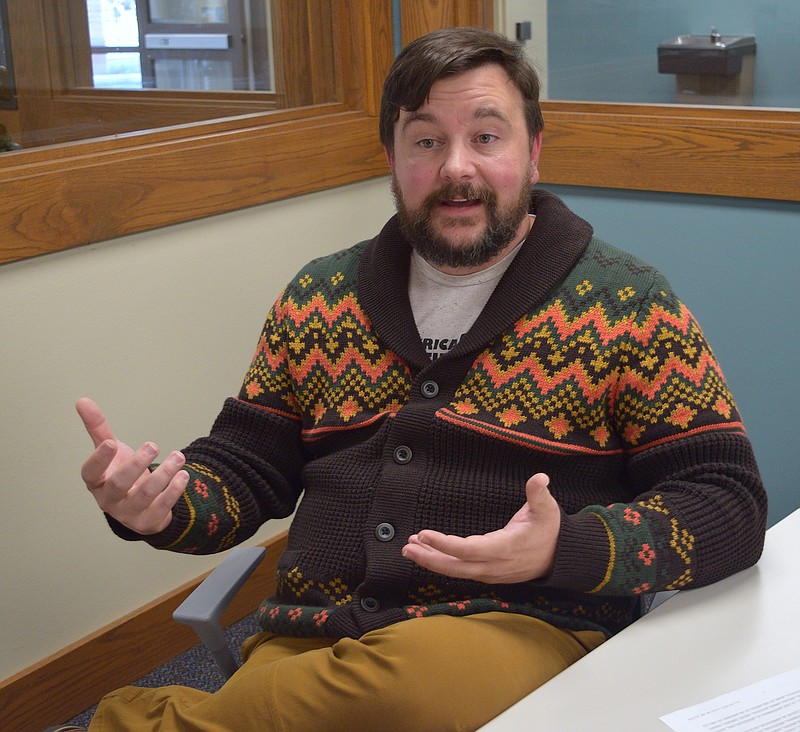 Library and school employees will be criminally and civilly liable for loaning materials that are already illegal for them to have for loan if a bill proposed by state Sen. Dan Sullivan, R-District 20, and state Rep. Justin Gonzales, R-District 19, is codified into state law.

The two legislators filed Senate Bill 81 around 4 p.m. Thursday, and it was referred to the Senate Judiciary Committee Monday afternoon. The bill seeks to amend the state's obscenity laws by creating a new offense and limiting what items can be lent by a library.

Currently, the law allows for employees, directors or trustees of a "bona fide school, museum, or public library" to be exempt from prosecution for "disseminating a writing, film, slide, drawing, or other visual reproduction that is claimed to be obscene" while "acting within the scope of his or her regular employment."

"One looks at the national scene and the state scene you see people all over the state of Arkansas, who think this is an important issue, either for or against," Sullivan, who has been in the Legislature since 2015, said Monday morning.

The proposed bill removes that protection for those working at a school and public library while leaving them in place for museum workers.

"If we're wondering about whether this bill is to punish librarians or if it is to protect children, I'll point out that this bill still exempts museums," Adam Webb, director of the Garland County Library, said Monday afternoon.

"It just strikes out public libraries and schools, and I don't know why museums are still exempted under this law. ... There's a hypothetical scenario where, let's say, Crystal Bridges Art Museum has some controversial artworks on the wall that could be challenged as obscene. Well, you have a carve out for the museum employees, but what about the research library that's at Crystal Bridges? So you could have an artwork on the wall that's obscene, but none of the museum staff get arrested for that, but the librarian does because they have a reproduction of it in an art book," Webb said.

Sullivan, who is in his first term in the state Senate, said he feels there is a need to care for a child's mental health as well as its physical health.

"People think that there is a need to provide some protection for children, just as we do for their physical health," he said.

"They all mature at different levels, and there are some things that are just not appropriate for children. The people of the state of Arkansas, my assessment would be, overwhelmingly agree with that because, again, we protect them in so many ways physically, that it seems that protecting their mental health and spirit -- and I'm not necessarily referring to religious spirit but the person's spirit -- it seems like that's worth protecting. That's what this bill does," Sullivan said.

Webb said the bill is "poorly thought out."

"It applies some double standards in certain areas of the law," he said. "It would create a chilling effect on libraries across the state, and ultimately, I think some of this is unconstitutional."

Webb referred to the Miller Test, which is the primary legal test for determining obscenity under the Supreme Court's ruling in Miller v. California, and he said the bill takes the ruling and extends it beyond what is legal.

"It's a well-known Supreme Court case precedent, where it says that the material has to appeal to the prurient interest, that the material taken as a whole doesn't have any literary, scientific, or artistic value, and that it deals with sex in a patently offensive way," he said.

"For something to be considered obscene in our country, it has to fail all three of those tests. This doesn't have an 'and' clause as far as I can read.

"This would say instead of something having no literary, scientific, or artistic value, appealing to the prurient interest and portraying sex in a patently offensive way, it just says that this hypothetical person could say, 'Well, I think somebody might find this arousing or exciting, and that's enough for me to challenge this.' That's not the standard. It's not the law."

Sullivan gave an example of a library receiving a complaint about material and not removing the material.

"If a court disagrees with the library, and they say it is harmful to children, and the library has left it on the shelf, then there's a $50 a day fine for every day that book is left on the shelf," he said. "Of course, the library can avoid that by just simply moving it away out of the children's section."

The bill does not make that stipulation, however.

In regard to libraries, the bill states, "A person that knowingly ... loans at a library" obscene material that is printed or written "upon conviction is guilty of a Class D felony." The bill inserts the line "loans at a library" into the current statute regarding distribution of obscene material while noting anyone who "knowingly has in the person's possession obscene printed or written matter ... upon conviction is guilty of a Class A misdemeanor."

"He can say that, but that's not what this bill says," Webb said. "And this bill seems to be copied and pasted from other legislation that has failed in other states. If he says that, that implies he has not read this, that he has filed a bill that he has not even read and doesn't comprehend, and that's dangerous. I don't think any senator in the state of Arkansas or any other state should be filing legislation that they don't even understand themselves."

The bill also adds a civil penalty for libraries of $50 a day "for each day of the violation" of the distribution statute or $10,000 "if the state, county, or city is determined to have repeatedly or recklessly violated" the statute.

"Who's the guilty party?" Webb asked. "You know, if something is deemed to be obscene in here, and there are criminal charges to be filed, are they for the person who selected the book for purchase? Is it the cataloger, who put it in the catalog? Is it the front desk staff who check it out to people?

"Is it our shelvers? We have a bunch of high schoolers who work here who shelve books; are they the ones that are criminally liable? I mean, it doesn't say who it is. ... This bill is so vague in who's responsible, what the charges are, how it would work. We have a system that already works. We have laws that already work that keep us from purchasing obscene materials."

The Senate Judiciary Committee is scheduled to meet Wednesday morning at 10 a.m. in Room 171 of the state Capitol. Both of Garland County's senators, Matt McKee and Alan Clark, sit on the committee.