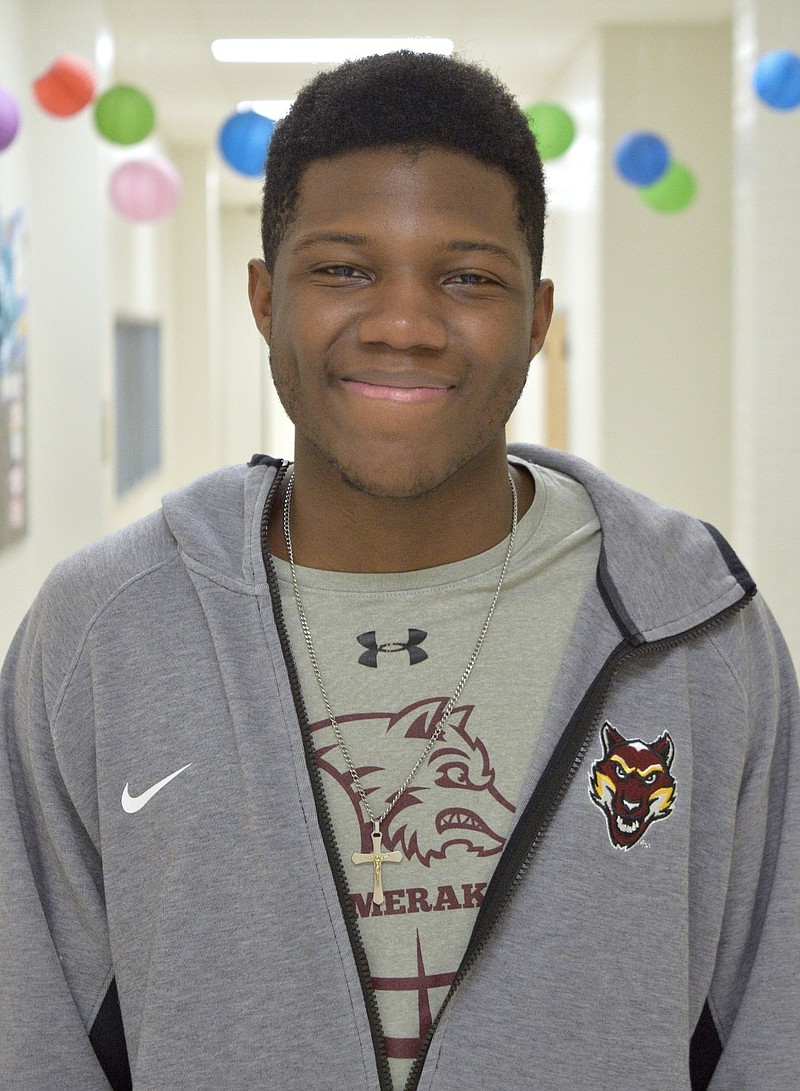 Patrick Ngassa, a senior at Lake Hamilton High School, recently received a full scholarship to attend Emory University in Atlanta next fall where he will study nursing. - Photo by Donald Cross of The Sentinel-Record

Ngassa received the scholarship through the QuestBridge National College Match Scholarship Program, which provides a pathway for high school seniors to attend top colleges and universities that otherwise might be financially out of reach for them.

"I'm not going to lie, at first I was a little nervous," he said upon learning he had been chosen. "My math teacher, Mr. (Brian) Leonard, he was very like ecstatic because he's only gotten one other person to ever receive that scholarship."

He said Leonard played a big role in his application process and that every year he tries to pick out a student he thinks would be a good candidate for the scholarship. Ngassa modestly noted he "just got lucky."

"I was a little nervous because, you know, leaving here with all my friends and family, to go somewhere I've never been before. But after a time, I'm very excited to go now. I'm actually going on a tour this March, so I'm very happy," he said.

The scholarship, which he noted he and Leonard did the math on, adds up to around $350,000 altogether. It not only covers the cost of attendance, but also tuition and fees, room and board, books and supplies, and travel expenses.

He said it feels "very good" knowing his hard work paid off, and set him up in a good position to continue his education.

The bachelor of science program at the university's Nell Hodgson Woodruff School of Nursing was recently ranked No. 2 in the nation by U.S. News & World Report. Ngassa said he may go on to attend its doctor of nurse practice program, which trains nurse anesthetists and advanced leaders in health care administration.

"Because my mom and I -- we aren't really, like, just that financially stable -- and we were stressing a little bit about how we're going to pay for my college. So this scholarship is really going to help relieve a lot of stress on my mom. She was very excited. I'm excited because now I don't have to worry about my mom helping me pay for college," he said.

Though admitting that it is still way too early to tell if he will eventually make his way back to Arkansas someday, he has narrowed his career path down to two choices. He said he would either like to be a nurse anesthetist or a traveling nurse, as he has always wanted to travel and experience different parts of the country.

The nursing profession itself holds a dear place in his heart since it happened to be his mother's career of choice, as well.

"At first it was a surgeon, and I'm not going to lie, like, I know I'm good academically, but I'm just really lazy," he said, laughing. "I just don't want to go to school for that long. But I always wanted to be a nurse because my mom is a nurse and she's just very caring and she's like my biggest fan. And so just trying to follow in her footsteps and plus they make a lot of money. So it's the best of both worlds really."

With still nearly a semester left of high school and a possible championship season as a member of the Wolves' basketball team to finish out, Ngassa said he plans to enjoy his final days in school and is excited about visiting campus this spring.

He said Lake Hamilton High School drama teacher, Stacey Bean, formerly worked at Emory and told him he will love it.

"That's my plan, just to go out, see what it looks like, view the nursing program, and just kind of get a feel of what I'm going to be doing for the next four years," he said.