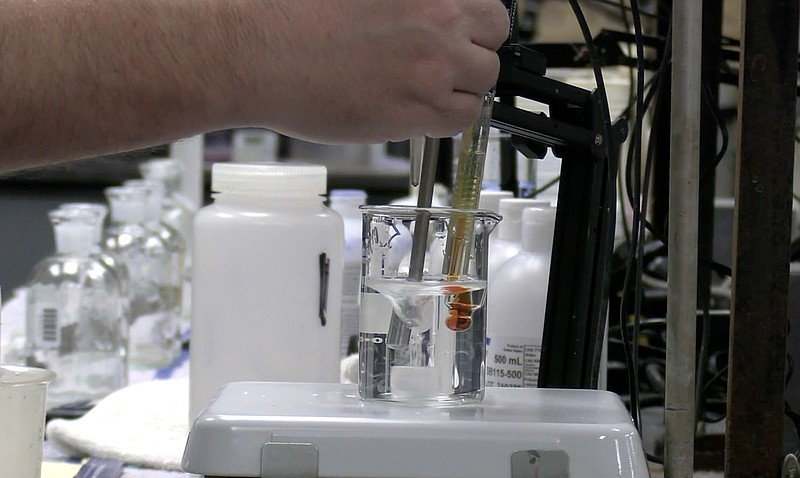 Effluent samples wait to be tested in January 2022 at the Davidson Drive regional wastewater treatment plant’s lab. - File photo by Donald Cross of The Sentinel-Record

The city says it doesn't expect to have to sell additional debt for state-mandated wastewater improvements despite the $8 million shortfall it reported in September.

Agreements the city entered into with the state Division of Environmental Quality last year mandated more than $60 million of improvements to bring the city of Hot Springs' regional wastewater system closer to compliance with the Clean Water Act.

Runoff enters the warren of underground lines that carry flow to the city's treatment plant, overwhelming the collection system and plant during prolonged heavy rains and leading to violations of the city's permit to discharge treated wastewater into upper Lake Catherine.

The finance department alerted City Manager Bill Burrough to the $8 million shortfall in September, according to emails the city provided in response to a records request.

A report the city provided showed that as of the end of last year, $9.56 million remained from the $18 million bond issue the Hot Springs Board of Directors authorized in the summer of 2020. Coupled with the $45 million in debt the board authorized last summer, the 2020 debt gives the city more than $54 million in bond funds for projects in excess of $64 million.

Burrough noted that since September the city has been awarded a $5 million grant for improvements to the Davidson Drive treatment plant. The money came from $270 million in American Rescue Plan Act funding the Arkansas Natural Resources Commission awarded for water and wastewater projects.

The application to renew the plant's permit, which expires at the end of August, said the city will increase capacity from 12 million gallons a day to 16 million.

That's the capacity of the full treatment spectrum, which includes biological processes that break down wastewater. Peak flow capacity, or volumes the plant can treat when biological processes are bypassed during rainy weather, would increase from 20 million gallons a day to 48 million.

An agreement amending a 2008 mandate requires the plant improvements be completed by the end of next year.

"We do not anticipate needing additional debt for completion of these projects," Burrough said in an email. "We were fortunate to receive a $5 million ARPA grant for work at the treatment plant and have CIP funds in addition to the 2020 and 2022 bonds. There will always be a need to invest in the infrastructure long-term, even after these projects."

A spreadsheet the finance department sent city staff in September showed $2.2 million in wastewater capital improvement funds were available as of the end of August. The department said $1.7 million could be used for the state-mandated projects.

The $45 million in new debt authorized last summer is in addition to debt issued to comply with the order the city agreed to in 2008 after reporting hundreds of unpermitted discharges from the wastewater collection system. Ratepayers were servicing $114 million in wastewater fund debt prior to the board authorizing the new debt to address collection system overflows that released more than 5 million gallons of untreated wastewater into the Lake Catherine watershed last spring and summer.

The unpermitted releases came from manholes near the Gulpha Creek pump station on Catherine Heights Road. The city reported a 1.38 million gallon overflow from Dec. 14-16, according to DEQ's response to an anonymous complaint.

The compliance plan the city submitted calls for combining the $45 million in 2022 debt with the $18 million 2020 issue. Lower borrowing costs from refinancing $38 million outstanding from bonds the board authorized in 2013 allowed the $18 million to be floated without raising rates. An amortization schedule provided by the city showed the annual debt service on the refinanced debt is $500,000 less than the original issue.

In addition to minimum and volume wastewater charges based on 88% of a customer's metered water consumption, the city assesses a monthly debt service charge that secures about $200 million in wastewater fund debt.

The new rate structure the board authorized to pay down principal and interest on the $45 million 2022 issue took effect last year, raising the charge from $17.73 to $19.73 for residential customers inside the city. It will increase to $24.48 in January 2024, with 3% annual increases assessed in subsequent years.

The charge for residents outside the city increased to $27.39 last January. It will rise to $34.05 in January 2024, with annual 3% increases assessed in subsequent years.

None of the $45 million has been committed. Burrough said projects the funds have been assigned to are still in the design, engineering and permitting phases. He said he hopes to let bids for collection system projects in the Gulpha Creek Basin this spring. An agreement the city entered into with the state last year requires the improvements be completed by 2030.

"We have prioritized projects and have held bidding the Spring Street project until we were further along on the design of Gulpha and the treatment plant," Burrough said. "We have that project ready, and I think we will be able to bid soon."

Downstream of the Spring Street improvements the city will be shoring up the 4-mile-long main section that gravity flows wastewater to the Gulpha Creek pump station. The city has said focusing on the collection area upstream of the pump station, which sits at the lowest point in the Gulpha Creek Basin, is critical to addressing unpermitted discharges from manholes on Catherine Heights Road.

The board awarded RJN Group a $763,180 contract in November to design, bid and inspect the project. The company had yet to invoice the city as of the end of last year.

"We believe we will meet the deadline and be substantially complete," Burrough said of the 2030 deadline. "We are using separate engineers on portions of the project and many of these will be under construction at the same time."

He noted the recent completion of the Grand Avenue sewer replacement, a project mandated by the order addressing sewer system overflows. According to the reconciliation report for the $18 million 2020 bond issue, the project totaled $339,150.

"We do have work currently being completed to meet the time frame," Burrough said.